RV Travels Up The Oregon Coast

While Allan was taking more wave photos, I turned around and found I had a deer for company. The deer was having its evening meal at Shore Acres State Park. We have been going down near Shore Acreas in the ev

enings to get photos of the ocean and now have quite a collection for this part of the coast. We arrived last Tuesday at Charleston Marina RV Park located at the Charleston harbor and were met by Jim and Nancy once again. It is great having personal greeters at each park, but just as we were getting attached to the idea they are taking off

for parts unknown again. That night we had dinner at a restaurant in Coos Bay and then talked the night away. Since their departure on Wednesday, we have been exploring Bandon to the south and Reedsport to the north. And we have been eating a lot of fish and chips here at the harbor. In the mornings during low tide, many of the residents here at the harbor head out clamming. They all have special shovels, pails, and most 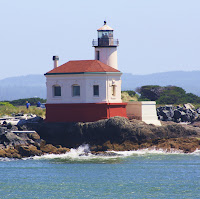 importantly....rubber boots.
On our trip down to Bandon, we took the Seven Devils Road, past the Slough and through the clear cut forest, where I just wanted to weep looking at the slash piles and desolation. But eventually we came out at a secluded little beach and continued on through the Bandon Marsh to the Coquille River Lighthouse. The photo looks as if the day is beautiful, but don't fool yourself. The

wind is blowing about 20-30 mph with 40 mph gusts, and they are freezing gusts. We are bundled up and still our faces and hands are cold. This is summer, right? Before we head for clam chowder we head a little further south in Bandon to get a photo of Face Rock where my mother has her ashes scattered. We always like to stop by when we are in Bandon to say hello to my mother.
Yesterday we headed north and our first stop was the Umpqua Lightho

use State Park. We were very disappointed in this lighthouse which is supposed to be one of the most beautiful, especially at night with the re

d and white beams of light. But it was locked up. So we headed back to Lake Marie, where we walked around the lake. It took about an hour to walk around the whole lake as it is not very big, but it was a beautiful path with ferns, rhodendrons, spruce, hemlock, pines, and viewpoints all around the lake. Then we hopped back into the truck and headed up to the Dean Creek Elk Viewing Area in Reedsport. If you c 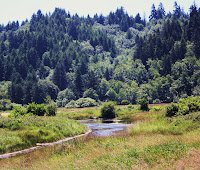 an see any elk in this photo to the right, you have better eyes than we do. But we did see ducks with ducklings. 10 ducklings to be exact. And there

were cliff swallows in the viewing station. One mother had a real problem. One of her babies had flown out of the nest and landed on a beam above the nest and did not know how to get back. Sh

e was having a fit and the two remaining babies said "we told him not to, but he did it anyway". Typical kids.

Later that evening we headed down to Cape Arago to get some sunset photos. Here is one taken just before the sun slipped away for the night. 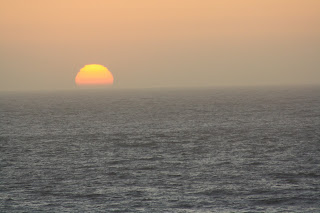