Sunday is the final day of our conference but Allan and I each have 2 workshops today. Before we headed off to our workshops we stopped by the vendor area to see if we had won any prizes in any of the raffles. No Luck. Oh Well, we feel very lucky just to be here and be participating in all of this artistic energy.
Allan started off his day with a workshop demonstrating gardens by Urania Christy Tarbet. She 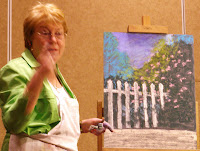 is also the person who founded the International Pastel Society and is a lovely person to boot. She liv 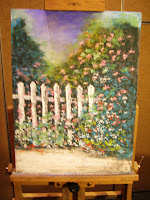 es and works in the Bay Area of California but travels all over the world hosting workshops. She said that gardens and floral still lifes were used by interior decorators and that she was able to sell many of her paintings to that group of people. She had had many life experiences and was able to tell many stories to her audience as she painted. Each of her flowers was individually painted and she had different little strokes for the different kinds of flowers.
While Alla

n was with Urania, I was with Sean Dye. He is a pastel artist from Vermont. He started as an abstract painter and then moved to landscapes after moving away from New York City. His work is more bold in color and he likes his underpaintings to be experimental colors and bright. He sketches in india ink from Holbein and paints his value painting in india ink as well. Then when the ink is dry, he paints primary complimentary acrylic colors over the ink to complete his underpainting. Finally he begins to add pastel bringing the colors back to the colors you would see in the photo reference. But all of that brightness shows through and 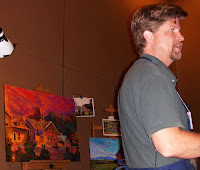 veral airline stories prompted by the most recent travail on this trip to Albuquerque. His Studio Bag was "lost" and when it was "found" 36 hours later, all of his pastels were in a dusty pile at the bottom of the bag. The security people had opened his pastel box and did not latch it again causing all of the pastels to fall out. This is a disaster that only a pastelist could fully appreciate. Pastels are like chalk, so they break into dust and small little bits when dropped. Pastel boxes are faced with foam to protect them from these kinds of peril but thanks to the airport personnel, he had to purchase all new pastels. He will have to sort out what is usable later when he gets back to Vermont.
After a very quick lunch which we packed in the 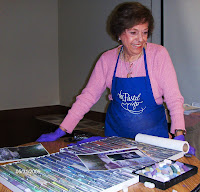 morning, we headed off to our afternoon workshops. I went to see Water in Action wit 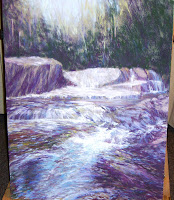 h Rae Smith, also from Vermont and she was very knowledgeable about water. She is known for her goldfish pond paintings and has done around 200 of them. She also paints the ocean, lakes, creeks, and rivers. She says she just gravitates towards water scenes. She did not do an underpainting, but began using the pastels in small strokes on a sanded gray board. The strokes went in the same direction as the water. She also illuminated how important it was to have lost edges, edges that change color, and found edges. She talked about how to create trees from shapes instead of drawing each tree. Creating an atmosphere in the sky as the trees go into the sky and the sky goes into the trees. The tree discussion was good as it echoed some tree advice given by Sean Dye earlier in the day. He suggested looking at Cezanne's trees into sky. 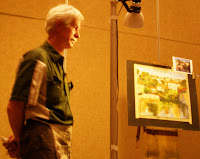 Allan's final workshop was with Alan Flattman who demonstrated Architecture in Landscape. From his on site water color sketch, he created his v 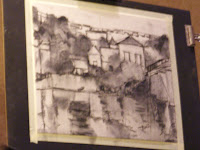 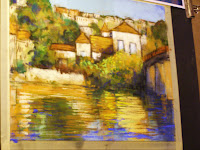 Alan was looking for the bright sunlight effects to come through in his painting. The buildings were blocks of color. He encouraged everyone to try the new Spectrafix which is casein based and can be purchased in concentrate. The final painting had the addition of blue highlights on the water and bridge.
Posted by Art In The Sun at 2:49 PM