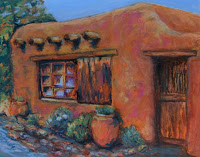 Yesterday at the monthly pastel meeting, Allan and I turned in our entries for the judging of the Sedona Show in April. Allan had about 6 to choose from and we polled all of our neighbors and friends to see which they would choose as his best work. Everyone was in agreement on the old pueblo house on Canyon Road in Santa Fe. Then there were some split votes on the remainder of his paintings but most of the votes went towards his two boat paintings so he 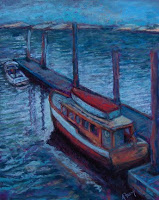 went with the popular vote choices. The red boat is near Oak Harbor on Whidby Island and the yellow boat comes from the marina in Charleston, Oregon. If this show is anything like the last show, then these will probably be the only two marina paintings entered in the judging. Who knows whether that is a good thing when the show is held in a landlocked state?? But we are hoping for the best. It is very hard to know what a judge will be looking for, especially when the judge is not a pastel artist. We will not know what the results of the judging will be until the end of March when we get our notices in the mail. In the meantime, Allan is doing a new painting.... our house. It was painted a color that is 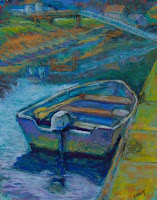 not in compliance with the parks official colors, so we had to agree to paint it within 6 months of moving in. So this is the month of painting our pink house a sort of greyish, sage green with cream trim. Allan got two of the small walls done and then it began to rain, again. So we are holding off for a few days and then will start again. Already the neighbors like the new color and so do we.

For my submissions there were not that many choices as I had lost a month of very little painting while I was ill, but I eventually tried to make up for lost time and painted two paintings of landmarks in Sedona and if they get into the show, maybe someone might buy one of them as a memento of their trip to the West. The 1st painting is of Cathedral Rocks and is from a photo taken in the spring when everything is green. Allan had to ford the stream in order to get the photo to see the rocks at this angle, but it is the best view. The 2nd painting is Slide Rocks up in the Sedona canyon and i 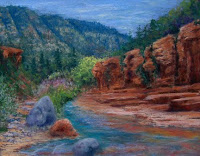 t is where everyone goes to swim, although the rocks get kind of slippery with algae when the weather warms up, hence the name "Slide Rock". Again... we took this photo in the spring when the water was higher and the foliage was greener. The last painting is from Taos, NM and is a drive around the eastern back side of Taos and Eagles Nest. The drive is called the Enchanted Circle and it is also spring in this photo which was taken in May. The snowmelt was running in little creeks throughout the entire drive and in this view looking south, we would be appro 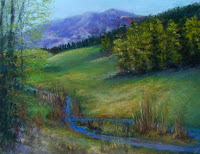 aching Eagles Nest where there is a huge lake and a great mexican food restaurant. We have been planning our trip for this summer and have decided to cut the trip to 3 months and go a shorter distance since we are on a tighter budget now. We are thinking of heading down to the southern gulf states and maybe the top end of florida and then turning around and heading back, trying to be home in September. We probably won't leave here until around the 1st of June or the end of May. This will be a very short trip for us, but we will still get to see the ocean and it should be nice and warm, just what the doctor ordered. Even though February was a month spent recuperating, we managed to have some good times with Jim and Nancy who visited our area for the month of Feb, and also Mike and Rose who returned from the Bay Area to get settled into their new Mesa home.
Posted by Art In The Sun at 1:14 PM