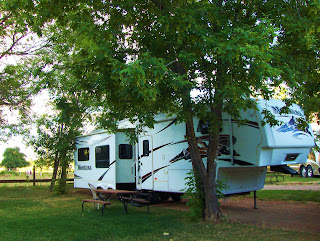 Last Thursday we drove a couple of hours NW from Chama to Durango, Colorado. We decided to stay at the Westerly RV Park http://www.westerlyrvpark.com/ which did not get very good reviews from the rv park review site but it is across the street from Trimble Hot Springs and we felt we could use a few days of soaking in the mineral springs. The reason that this park does not get good reviews is that it charges just as much as the nicer parks but has a limited num 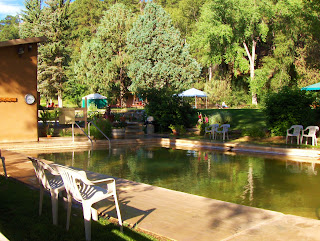 ber of sites that are dirt and gravel with unkept grass between each site. There are a couple of perms living here and their stuff is sitting around making the whole place look dumpy. On the positive side, there are trees around the perimeter sites for shade and the FHU are good, as is the verizon service for our internet access. There are no amenities of any kind but they offer a discount of 10% to the hot springs, however we got a better discount just being seniors. The hot springs on the other hand are very well kept up and they offer a variety o 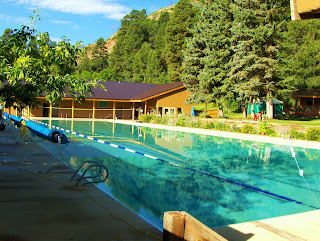 f services which we do not use, just being satisfied soaking in the mineral water (see above right) and taking dips in the heated pool. (right) The mineral water pool is divided into two parts; the far right side is about 109 degrees and the larger left hand side is about 104 degrees. Not many people sit in the "lobster pot" side or at least not for very long. The swimming pool is 86 degrees and feels delicious after soaking in the mineral water. The whole facility is clean and well landscaped with grass, flowers, and trees. http://www.trimblehotsprings.com/
On Friday we dro 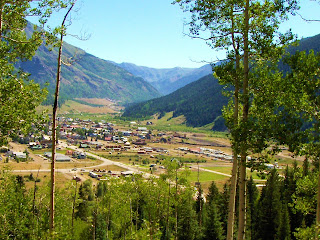 ve up through Silverton (below left) and on to Ouray to see the towns and the Rockies up close. The road to Silverton from Durango was 50 miles and it took about an hour to drive, but the road from Silverton to Ouray was only 24 miles and it also took an hour to drive. It is called the million dollar highway and it has been blasted out of the sides of the rockies and the switchbacks were incredible. We did see a couple of people towing trailers and they were going about 2 mph coming down that grade, back and forth through those narrow hairpin turns. The scenery was stupendous however, gorgeous on all sides, sometimes with rocky cliffs to your right and green meadows with tarns leading up to craggy spires on your left. We always thought 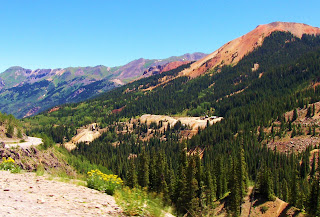 the Tioga Road in Yosemite was a killer but this road topped that by a good measure. For anyone interested in staying in Ouray in their RV, the way to come in would be from the North and not from Durango. Halfway between Silverton and Ouray is a pulloff where you can read about the Iditarod Mine and see where they have reclaimed the land on the old mining site. It is hard to believe that there were about 4 small towns situated up here where the miners lived close to their work. Originally there were numerous mines, but the Iditarod purchased all of them and created a tunnel that extended all the way under the mountains to the west and reached Telluride. There are no roads to Telluride from this road, just the tunnel. In the photo above right, you are looking to the east at Red Mountain which was one of the mountains that they mined for many types of ore, silver included. The mountain is red and so the water in the creeks is orange and all of the rocks in the creek are also orange/red. What is interesting in both of these photos is that they were taken at around 10-11,000 feet, so the mountains in the background are at 13-14,000 feet. Silverton is almost 10,000 feet and just walking around the town made 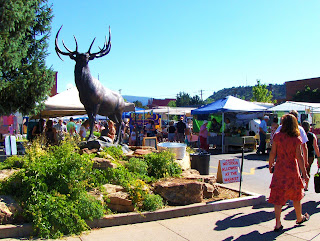 us short of breath.
Yesterday we visited the farmers market where we purchased some croissants for breakfast. The farmers market had many vendors selling beef, elk, and pork. There were 3 bakery vendors and several with produce, but not as many as we had thought there would be, as we had seen many veggie gardens along the highway. Then we walked through the town checking out some of the s 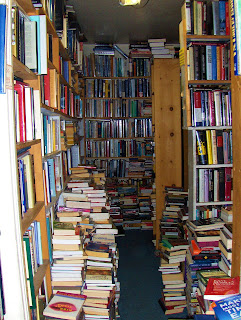 tores, where we found a couple of used bookstores and the Durango Arts Center. One of the bookstores was the kind of establishment where it is hard to conceive of the proprietor knowing where anything might be, or even what is in stock. We could barely get around to look at the bookshelves and if there was already someone in the aisle, then forget about getting past them. We finally gave up and continued on our tour around town, ending up in an old saloon for lunch, which turned out to be pretty good (for a tourist establishment). Today we are just kicking back, and will hang out over at the hot springs later today, swimming and soaking. Tomorrow we are heading to Moab for an overnight on our way to Portland.
Posted by Art In The Sun at 7:59 AM