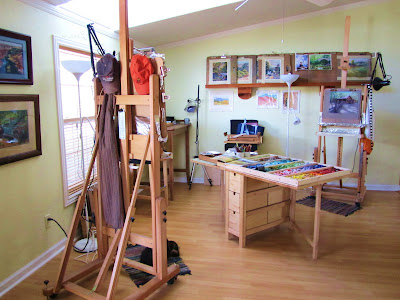 Here is the studio space where we have been spending a good deal of time and effort this winter painting more masterpieces in pastel. We were able to take a workshop by Allen Garns who teaches at the Scottsdale School of Art and learned something new about values and hues. 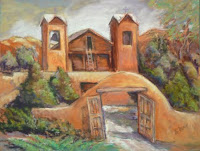 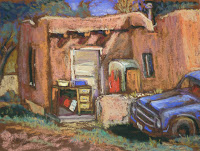 accepted for the show and I had only one.
To the left is Chimayo Church and to the right is Front Porch, both by Allan. 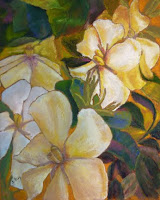 painting while we are up there as well as attend the reception and man the show for one of the days. To the left is my painting for the show entitled Gardenias.


We are busier than ever with our pastel group as we decided to jump in and volunteer for some of the board positions this year, so Allan is nominated for the International Assoc. of Pastel Artists representative and I am nominated to work on the Workshop committee.

We will be leaving Arizona for the summer by May 20th this year and heading to Albuquerque for the IAPS Convention. After the convention is over we are heading East to visit with friends, take a workshop with Michael Chesley Johnson on Campobello Island, tour Connecticut, Cape Cod, and other coastal towns throughout Maine prior to heading back home at the end of September. The blog will be up and running along as usual as soon as we get on the road. I apologise to all my readers for not blogging during the Winter but I didn't want to bore anyone with the little that we do around here (other than paint). Although we did have some good lunches with Mike and Rose, visited with my brother a few times, and had my daughter and son-in-law come for a visit. We have also gotten to know our neighbors a bit better than we did last year and found a fellow artist living just a zigzag down the street. Still playing bingo on Wed nights but not winning as much this year as last year. But still, I won enough to purchase a new back door for the kitchen with a window to let in the light. So there you have it.... the life of the poor and undiscovered (artists).
Posted by Art In The Sun at 6:59 PM