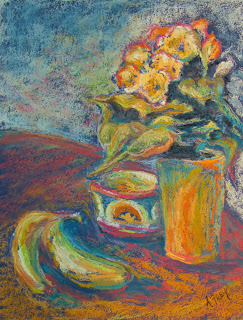 After the submissions in January for the Spring Sedona Show, Allan and I got back to work at the easel and have a few more paintings completed. Allan has been reading Lois Griffel's new book and tried a still life painting with some of the techniques that she uses for her landscapes. Lois blocks in a complimentary color underneath each form which then shows up when the final layer is put over the top. This gives a very vibrant look to the painting with many colors showing around the edges or coming through the fi 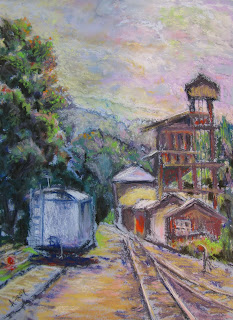 Allan also wanted to try a painting that had a soft pastel colored sky that was similar to how Kim Lordier painted some of her skies. For this painting, Allan chose a photo that he took in Chama, NM at the train station last year. He then echoed the sky down in the ground which was a nice touch (in my opinion). 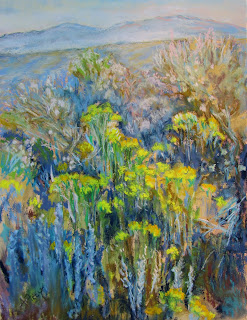 And in this third painting, Allan used a technique which we just saw demonstrated at our pastel

meeting by Richard McKinley. An underpainting is completed using watercolors and the watercolors are allowed to drip down in a serendipitous manner. Then the pastel is placed over the watercolor allowing some of the dripping to show through. Allan chose to use a photo we took at Mono Lake a year ago where the shrubs are covered in flowers and stand out against the sierras in the distance. 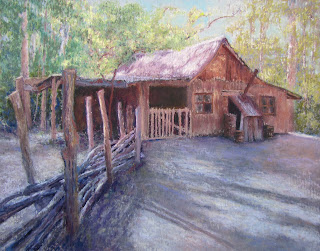 the Allan Garns workshop at the end of January, I wanted to try a painting using some of the values that I had learned in the workshop. I decided to do a subject that I had already done a year ago, but at a different viewpoint and that would be the Sheepherders Shed up at Boyce Arboretum. I actually enjoyed doing this shed for the second time. It seemed to be familiar and thus a little easier to portray on the second time around.

And speaking of the second time aroun 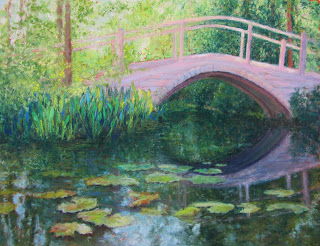 d, I decided to tackle a painting that had given me so much trouble in the past that I just threw it away. This was the bridge at Cypress Gardens in South Carolina. This is a bright pink bridge, but I tried to tone it down a little and get some of the values into it that I had just been working on with Allen Garns. It seems to have come out better than the first time, but you never know... I may give a third try someday.
Posted by Art In The Sun at 10:10 AM