International Association of Pastel Societies - Gathering of the Giants con't 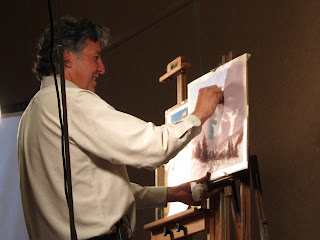 On Saturday and Sunday of the IAPS Conference, Allan and I both saw Lorenzo Chavez, but in different sessions. Allan saw him demo an arid scene and I saw him demo a painting of some peaks in Colorado with snow. In both demos, Lorenzo stressed a conte crayon sketch with lines that were directed towards the focal area and if necessary he added geographic features that were not actually there in order to have the edges o 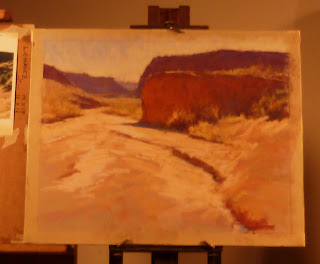 f the painting pointing in the direction he needed for the composition. In the alpine painting he reduced the quantity of trees to a single treeline where he created his darkest darks and established a path up through the foreground to lead to the trees. He used yellow, red, and green along with the blue for the sky and kept the mountain to its basic form even though in the photograph it was heavily crevassed. In the arid scene, he used a stark blue for a flat shadow at the base of a huge rock formation. The blue of the sky is bounced off of the wall onto the flat plane. That contrast with the red of the rock was startling. In the desert, the shadows are crisp cast shadows and therefore there is a strong line of light on the edge of the blue and the way he shows that is by outlining the blue with a continuous thin yellow line.
Christine Debrosky was another artist, this one from our own Arizona Pastel Association, that Allan a 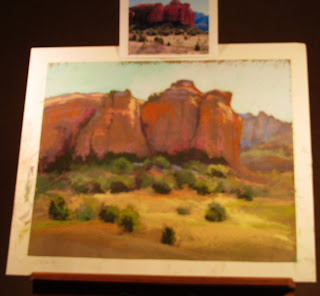 nd I saw in different sessions. My session was all about plein air painting to studio painting. Christine believes that a plein air painting is essential for capturing the memories of lights and shadows. She always goes out plein air either in the early morning or later in the evening. She had numerous plein air studies for us to see and also explained about her clothing and palette. For the demo, she used plein air studies, photographs, and a Kodak photo manipulator so that she could zoom in on parts of the photograph to see details. Her paper was already prepared with an umber acrylic wash to set the stage as the color that would show through the final painting. She had a fairly detailed sketch already completed and used the remainder of her time with us placing Terry Ludwig or Gerault soft pastel colors on the Sedona landscape in small marks working over the entire canvas, bit by bit. In Allan's session, she re-emphasized her dedication to painting lights and shadows. She only photographs on the edges of the day, early morning or late afternoon. We have noticed this in the 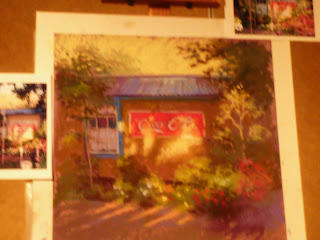 paintings she submits to our shows. The subject of this demo was a storefront in Sedona in late afternoon sun with a bright yellow sun form on a red coca cola sign as the focal point. Interestingly when she does lettering, in order for the lettering not to look amateur, she paints the negative spaces around the letters. As a painting technique, she offered this gem: always have in your hand, the shadow color of the flower and the lighted color of the flower when painting the flowers in a scene in order to balance the two against each other. As she paints she says to herself "warm vs cool, warm vs cool" to achieve beautiful foliage.
I also attended a 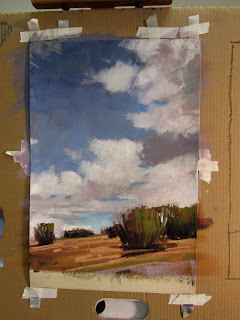 hands on session with Liz Heywood-Sullivan on painting clouds. She emphasized an underpainting with turp to establish the areas of sky vs clouds and explained about putting the horizon line below the center of the painting. She also talked about the colors of the sky and how they darken as they rise from horizon to zenith. I really enjoyed the hands on approach to the demos as we were able to see the artist do a step, then we all attempted to do it too, then the artist would do another step, and we would follow.... and so on. I wish I could say that all of our paintings came out as well as hers did, but we at least got a better idea of how she got to a finished product.
I had signed up to see a demo by Clark Mitchell and he was not an artist I was familiar with, but I really enjoyed him as a person and very much 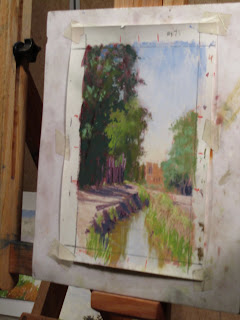 liked his techniques. He told us that he had studied with Albert Handel for four years and you could certainly see the influence when you looked closely at his trees. He said that it is important to look closely at trees to see what the species shape is and also what the individual tree shape is doing. He did not do a painting from start to finish, but instead he showed us how he did an underpainti 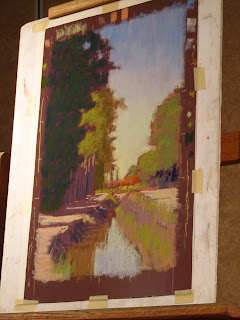 ng from a photo that he had, using bold bright colors underneath the local color he would add later. He is a true advocate of plein air painting and is also an environmentalist with a studio made of hay bale c 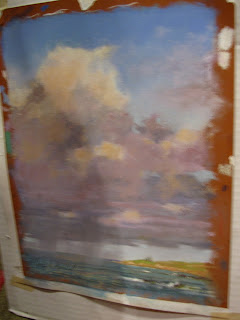 onstruction. He used a plein air painting (see above right) that he had done one morning out in Albuquerque of a canal scene to show us how he blocks in his local colors and changes the colors or shapes in the final painting (see above left) after evaluating his plein air study more closely. We were able to see many of his completed works, unframed, still on their painting boards, as examples of techniques that he wanted to show us. His examples of clouds were impressive and he said that you have to remember that clouds are made up of water vapor and to keep them soft in the painting.
Posted by Art In The Sun at 3:15 PM