On To Mystic, Connecticut

We left New York this morning and hope that we left all of the rain behind. We had hoped to see so much while we were at the southern end of the Hudson River Valley but instead we were plagued by truck issues and three days of drenching downpours. On Tuesday, a mobile rv repairman came out to see what was wrong with our truck and also our rv brakes. As it turned out, he found and 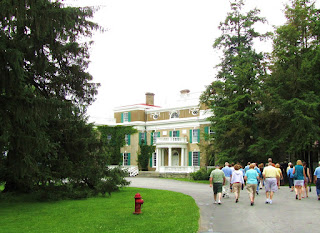 fixed the short in the rv wiring right away, then determined that the bolts had loosened in the steering column of the truck, not allowing it to engage in Park, which kept the engine from starting. That was taken care of by Allan following him back to his house where he had a tool to get everything tightened up. So now we had wheels again but the rain was ushered in with much flashing of light and banging of drums up in the heavens, and it proceeded to pour steadily for all of Wednesday and Thursday. By Friday we were going stir crazy and so were the dogs. Ned was dying to get back out and see those cute little squirrels again. For those of you who have met Ned, you already know that he talks and has about three different sounds that he makes, but now he has a new sound... we call it humming 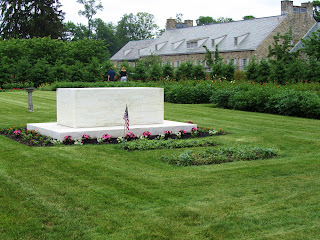 with squirrels. Even though it was still drippy and overcast we decided to head off to Hyde Park and see Franklin Roosevelt's home. In our travels, we have seen several Presidents homes now and it always strikes me how unpretentious they are. Even though Franklin Roosevelt came from old money, the home that you see in the top photo was only two stories without the side wings until he and Eleanor had 5 children. Finally Franklin's mother Sara decided to enlarge the home to accomodate the larger family, so a third story was added for the children and the side wings were added because by this time Franklin was Governor and after he got polio he had to have servants to help him get around and care for him. Even so, the dining room was not much larger than you would see in a regular home. The spare bedrooms were definitely under decorated in spite of the fact that Churchill stayed there 4 times and other foreign heads of state, including the Queen of Norway and the Queen of England stayed overnight at his home. I imagine the Queen of England was nonplussed given what her home looks like. We were not allowed to take any photos inside the building so unfortunately I have no pictures to show you, but take my word for it.... we are living in a higher state of luxury today in our homes than he was 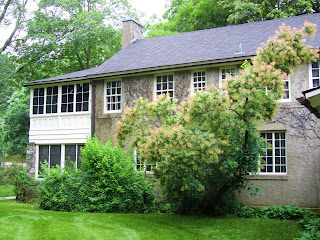 even with servants. Eleanor had her own cottage about two miles away, still on Franklin's property, but leased to her and two of her friends until they passed away. She pretty much led her own life, after she discovered all of his infidelities and especially after he contracted polio. She acted as his eyes and ears traveling all over the globe to get first hand information for him as President and after his death she was asked by Truman to represent the US in the United Nations where she made a substantial contribution to human rights and at home in the civil rights act. Now world leaders came to her little cottage and were served pot roast on Franciscan ware while they got her opinions about issues on the world's stage. In the second photo, on the right side, is Franklin's gravesite in his mother's rose garden. His grave has the little flag and Eleanor's grave is right beside him. His little dog Fala is buried close by. All and all, an interesting visit.
Posted by Art In The Sun at 1:09 PM