After leaving Acadia NP, we headed down the Maine coast to Camden where we had intended 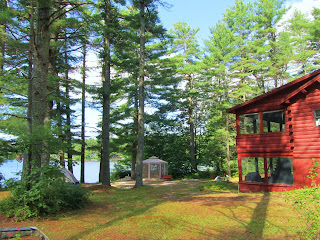 to stay at the State Park. We drove through pouring rain and arrived to find that we could not fit into our intended site, the only other site they had was filled with mud, and the weather forecast was for continued rain during the remainder of the week. They put us out into a field for the night while we hastily made some different arrangements. I called Lake Ivanhoe in New Hampshire to see if we could arrive two weeks earlier and they said "no problem", so the next day we headed up to visit with our friends who live across the street from us 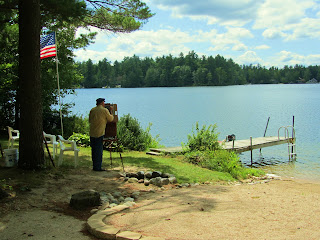 in Arizona during the winter. They have a beautiful cabin on Lake Ivanhoe and live right next door to another couple that have purchased a winter home in our same park in Arizona. We had a great time getting shown around the area by both couples and meeting many of their friends and relatives. One of the days was full sun and we took the opportunity to do some plein air painting. The top photo is our friend's cabin on the lake and the photo above right is Allan doing a 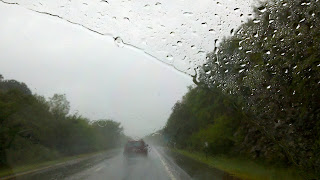 painting of their rowboat at the small dock. It was a very relaxing time and we sure appreciated all of the hospitality and good eats we received from everyone. We started west on Monday, heading to NY to spend the night, and encountered nothing but drenching rain all day. The highway was puddled with water and on one of the interchanges, we had an idiot cut right in front of us 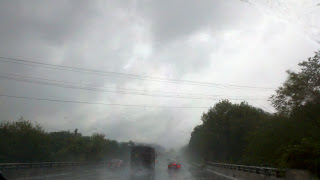 and slow down so that Allan had to put on the brakes and we started to hydroplane and skid to the side. Allan was able to get us out of it, but it was a scary moment. These 3 photos are taken in Massachusetts, Connecticut, and New York. Can't remember which is which, but as you can see it was a very rainy day and the big trucks throwing up all t 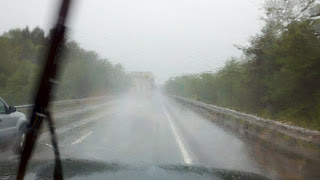 heir spray just made it worse. Today we are in the middle of Pennsylvania and the sun has decided to come out for the day. We decided to spend an extra day so that we could visit the Amish Flea Market in Belleville. It was a beautiful drive through rolling hills and several state parks to an agricultural valley where many of the farms ar 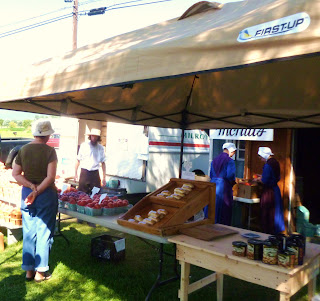 e owned by the Amish (and also the English, which I guess is the rest of us). The flea market was very large and we were able to buy fresh peaches, plums, and small fruit pies and moon pies which are crescent shaped. I got a bird house made of bark and Allan got jars of jam, a hacksaw, and a book. It was fun prowling around all the funky stuff that everyone was selling and it was the place to be if you wanted a hunting rifle that is for sure. There were so many people selling rifles we could have started a small army right the 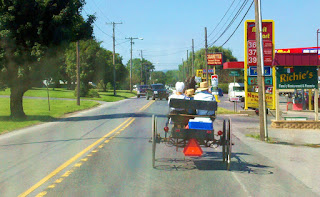 re in Belleville. Of course it was the English selling all of the rifles and flea market stuff, the Amish were selling the produce and pastries. We saw numbers of their horse and carts out on the road and those horses are really stepping out. Allan was very taken with the area, he said it reminded him of New Zealand with all the green fields and villages down in the vales with the hills beyon 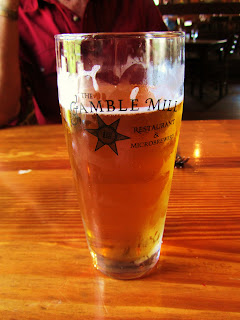 d. We then took a different route to get back to Bellefonte where we had lunch at the Gamble Mill Restaurant and Brewery. Allan had a pastrami sandwich and I had baby back ribs, which were both so good that we wolfed them down before I got a photo of them, even though the camera was sitting right there on the table. But the best part was the beer. We had a Sessions Ale and it was the first beer I have ever had that was perfect, malty and yeasty, smooth and refreshing, none of that bitter hoppy taste, it was the best beer ever. We told the waitress we would add a couple of six packs on to our bill and were told that they do not bottle their beers. Oh well, it was a beer and a day to remember.