It's A Dog's Life

Our trip down the Oregon Coast began in Cannon Beach, a beach mecca for Portland residents who cram the small town to its seams on the weekends and taper off during the week.  The beaches were clean and white and long.  Aside from photo taking jaunts up in Astoria at the marina, there were long walks on the beach with the dogs and not much else unless you wanted to break the bank shopping or eating in Cannon Beach.  We stayed at Sea Ranch where there was every kind of camper imaginable and bonfires each night reaching 12 feet high at every tent site.   One thing about weekend campers, they don't stint on the firewood.   We took the dogs with us when ever we were going to the beach and they took to it right away.  Elsie becomes superdog and can outrun Murray without even trying.  She will get way out ahead of him and then circle around and come running straight at him, making a jump over him to head off in a new direction.  He tries and tries to keep up and finally lays down in the sand with his tongue hanging out. 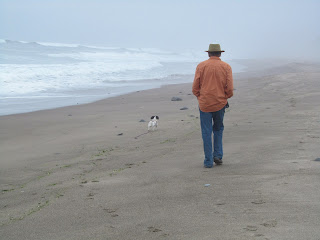 After leaving Cannon Beach, we headed down to Lincoln City.  This was another city where we had never stayed before.  We were determined to get out of our rut of always staying in Florence or Charleston and trying some new places on the coast.  Although the Premier RV park in Lincoln City was very nice and we found a great little town down the coast called Garibaldi which was a tiny fisherman's harbor where Allan was able to get some great photos of boats and marine buildings, I doubt that we would ever go back.    There just isn't any comparison with staying at the harbor in Florence or staying at the marina in Charleston where we can get halibut and chips for a reasonable price at the little fish n'chips stand.

Yesterday we arrived in Waldport where we will stay until Sunday.  Then we are headed down to Brookings for our last month at the coast for this year.   When we arrived the sun was out and the people in McKinleys' Marina RV Park were all outside their rigs in disbelief.  One woman told us they had had 74 days straight of rainy weather.  We took the opportunity to drive down to Yachats where the coast is rocky and get some photos.  Good thing we did because by dinner time the clouds were rolling in and it was raining with thunder and lightning by 8 o'clock.   I didn't want to tell her that everywhere we go it rains, they might have asked us to leave.
Posted by Art In The Sun at 8:51 AM