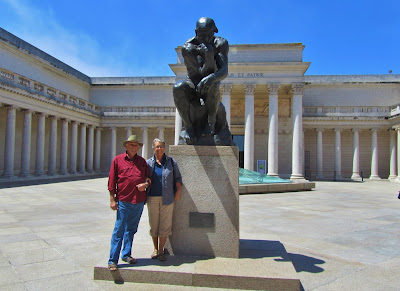 Tuesday was another wet fog type of day, perfect for visiting the art museum.  We headed back across the golden gate bridge to the Legion of Honor where the collection is of mostly European Paintings.  We were a few days too early for the new exhibit of Impressionists on Water, but we may go back on Saturday if we have time.  In the meantime we started off in the courtyard in front of the museum where we practically had to wait in line to get our photo with The Thinker by Rodin.  As a sculpture, it is massive and imposing.  As a man, the thinker is fairly lumpy and thick.  It is an original casting and I am glad to have been able to see it.  Inside, the museum has a very large collection of many of his other pieces, both large and small.  But what we really came for was the paintings. 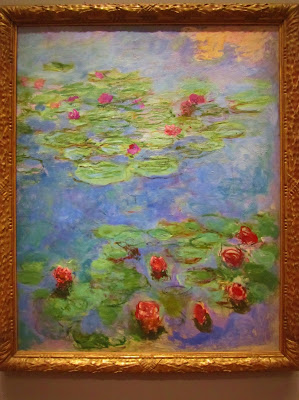 There were several Monet paintings, a couple of Degas, and a sprinkling of numerous other Impressionists, Neo Impressionists, and very few post Impressionists.  There was nothing by Gauguin for instance.  Occupying the far back wall was one of Monet's Water Lilies.  It was a lovely painting, I actually liked it better than the large wall sized water lily paintings that we have seen elsewhere.  He used color, light, and atmosphere to blur perceptions of depth, with the light reflecting the clouds and sky overhead and also emanating from below. 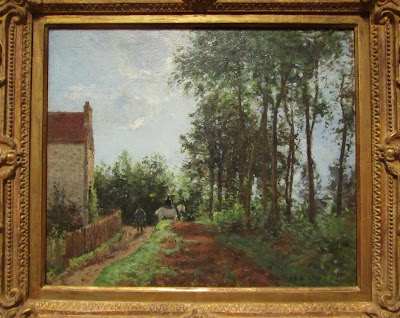 One of the paintings that I found interesting was by Camille Pisarro who studied under Gustav Courbet.  Pisarro was one of the earliest painters to paint plein air and to use the local people as subjects in his paintings.  He became a Neo Impressionist at the age of 54 and was considered the father of impressionism.  He painted scenes in the area where he lived and this painting called The Road Near The Farm was painted during his forties. 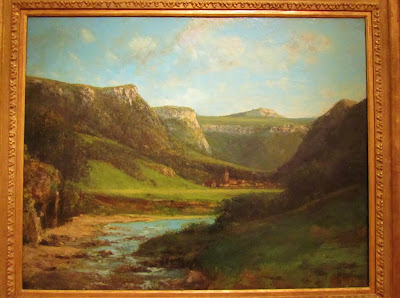 He later became friends with the younger artists like Renoir.  There was a painting by Renoir but it was not one of his best, it was a study of a woman with child and although it was unfinished, he did sign it.   There also was a painting by Gustav Courbet called Landscape in the Jura.  His sky and river were the most delicate blue.  But, the painting that was the favorite of both of us, was 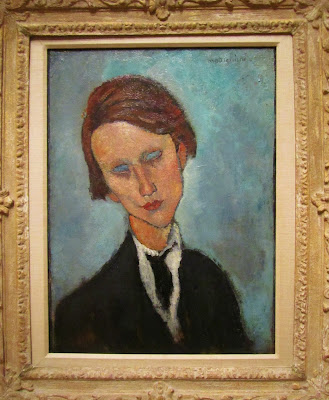 Amedeo Modigliani's portrait of a young man in 1918.  His brush strokes around the edges were really feathery and the edges were not lost, so much as wispy.  His portraits almost never have eyes and this one was no exception, but it made no difference in the impact of the painting.  This almost mask like face is because of Modigliani's fascination at the time with African Masks and his influence by Cezanne with using a distortion of the figure and the free use of large, flat areas of color.  Other than Cezanne, Modigliani maintained his own 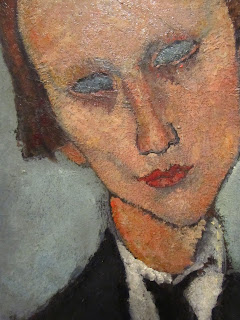 style throughout his short career as an artist, dying at the age of 35 of tuberculosis, drugs, and alcohol.  In the photo to the right, you can see the fuzzy edges around the collar and neck.  In spite of the flat look to his portraits, he was able to accurately capture the character and personality of his subjects.  He did several portraits of other artists and they are all recognizable.
By this time Allan and I had worked up a real appetite analyzing all these paintings, so we headed downstairs to the museum store and café.  Allan had quiche (yes, real men do eat quiche!) and I had the pork sandwich with roasted tomatoes.  This time we were determined to get photos. 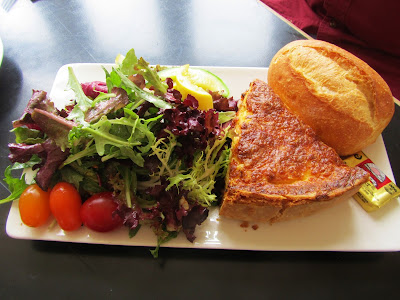 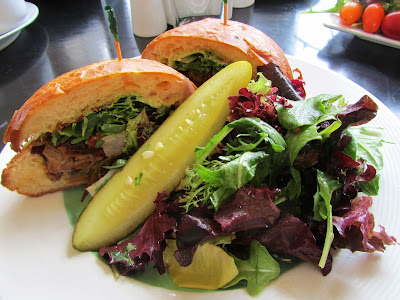 Yesterday we drove to Bolinas via Stimson Beach.  Hwy 1 was a very twisty road, definitely not suitable for large rigs, but it only took about 40 minutes to get there. 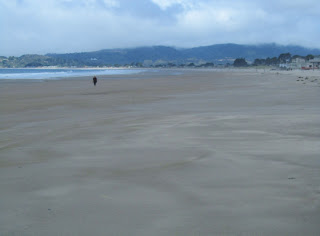 We stopped at Muir Beach first to take some photos and two ticks immediately jumped on to my pants.  Yuck.  We moved on to Stimson Beach which is long and flat and I guess it had hundreds and hundreds of people on it during the memorial day weekend, but for us it was almost deserted.  And cold, windy, and foggy.  We snapped a couple of photos and headed further up the road past the tidal flats between Stimson Beach and Hwy 1 which had several vultures chowing down on something, flocks of Canadian geese, and beautiful snowy egrets along the way to Bolinas, which has not changed one iota since the last time we saw it in the 70's. 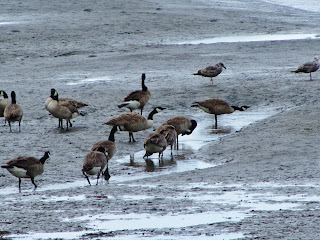 But how could it, there is not much available land unless you build on a rocky outcropping and who would want to live out there anyway with ticks and fog?  So we did what we do best, we had lunch.  Aside from the café, there was a small natural foods store, a small hardware store, and a surf shop.  The sun came out momentarily so we sat on the patio and 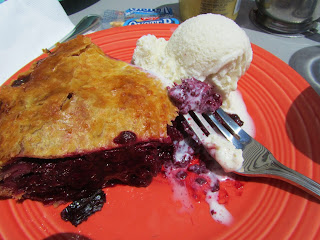 had lunch with home made blackberry pie and vanilla bean ice cream for dessert.  Is it any wonder that I can't lose any weight?  Then we took the Panorama Hwy home which was lined with fragrant douglas fir trees back over the top of Mt Tamalpais. ﻿