ROUGHING IT AT THE GRAND CANYON 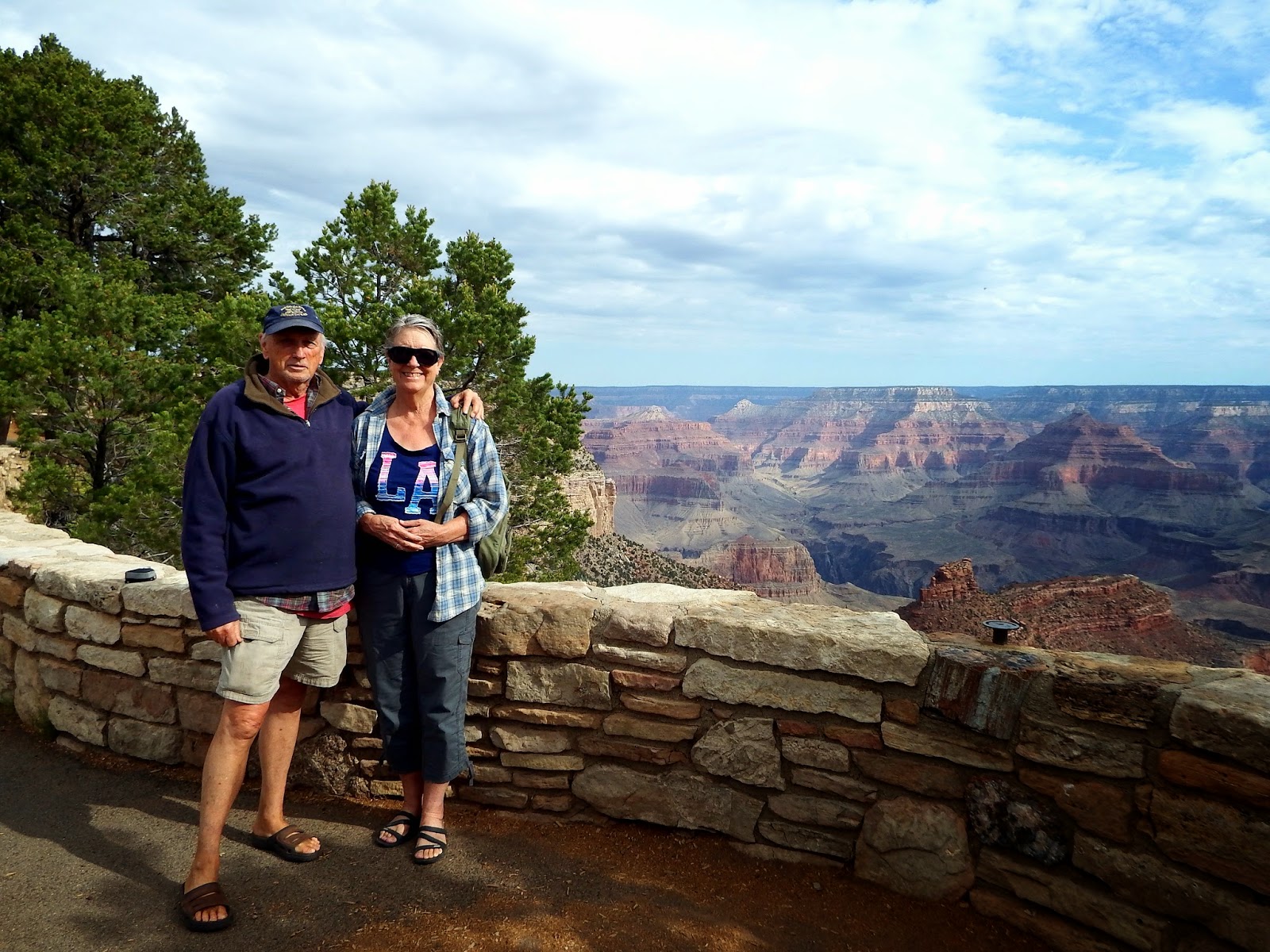 After 30 years, we thought we might make a return to the Grand Canyon.  We arrived on Thursday, as planned, but it was touch and go there for a little while.  On Tuesday evening, while we were still in Flagstaff, we got a phone call from our neighbor.  Our irrigation line was blowing off an elbow joint and although he had done a temporary replacement for it, we had already lost one home to an outside irrigation leak and we decided to be prudent and drive back to Apache Junction and take a look at the system for ourselves.  We finally arrived about 10:30 at night and sat outside for a bit, while the A/C was bringing down the inside heat of the house.  We got up at 5 a.m. and Allan decided to replace the system with our old manual system until we returned in August.  We both felt a little better when we hit the road back up to Flagstaff.  It turned out to be just a little hitch in our giddy-up and we were ready to drive to the Grand Canyon on Thursday.
We are staying in a national forest campground WITHOUT HOOKUPS OR SERVICES,   to see if we could dry camp.  Well.... saving water is no problem, and letting the yellow mellow is no problem, and using the 12 volt to read by is also no problem.  The problem is that all of our cameras, jetpack, computer, smart phone and ipad stuff needs to be recharged, every day.  I ended up recharging the smart phone in the truck while we were driving.  The rest is getting recharged via a Honda Generator which Allan has hooked up to our electric line to the rv.  Also, we are camped in a spot with partial shade.  Of course during the hottest part of the afternoon is when the shade is impartial and we get not one speck of it.  But we are managing.  Today we stopped by the Trailer RV Park in the national park itself and they gave me all the info for making reservations for the future.  We will definitely be doing that for the next trip.  We have found that we CAN manage, But Why Do We Want To.  Is it because we want to be in a rustic site where we can sit outside early in the morning and watch our drowsy camper across the way stagger over to a bush and water it (when there is a very clean restroom with pit toilets just 50 feet from where he is standing.  Or perhaps we want to be where we can hear the boom boom boom of the boom box somewhere at a campsite nearby.  Or maybe it is because we can sit outside and watch the blue jays and the nuthatches, although I suspect they also have those over at the Trailer RV Park in the national park. 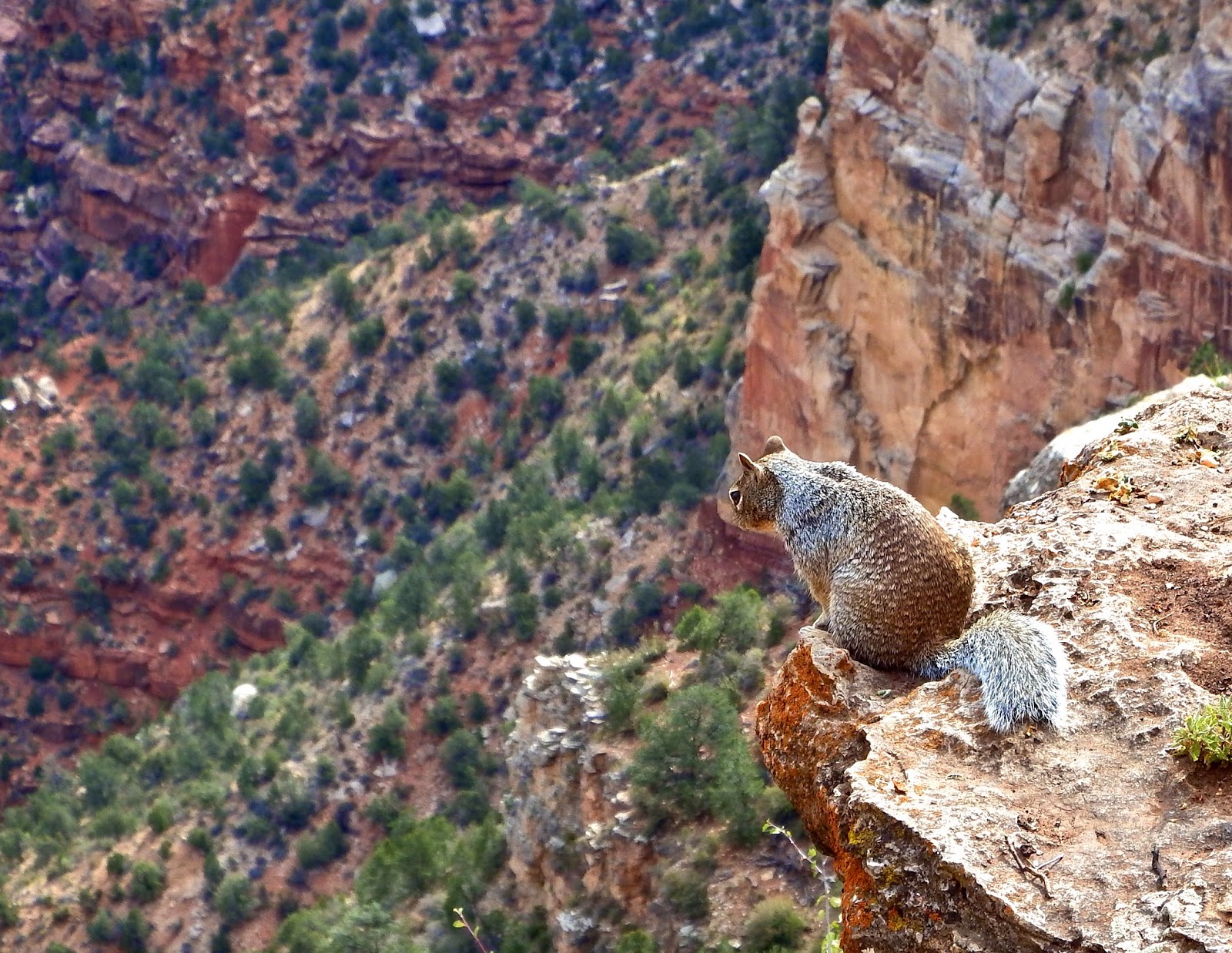 While we were walking the trail along the edge of the canyon over to El Tovar for breakfast, we stopped many times to take photos or just to contemplate the distance down or across the canyon.  At one point we realized we were not the only sightseers when we spotted this little feller, sitting calmly on the very edge, looking down for several minutes.  Just think, he gets to see this view every day of the year, what a lucky guy.
After his moments of contemplation, he turned around and scurried off, to take care of gathering nuts and all those other mundane duties of his daily life. 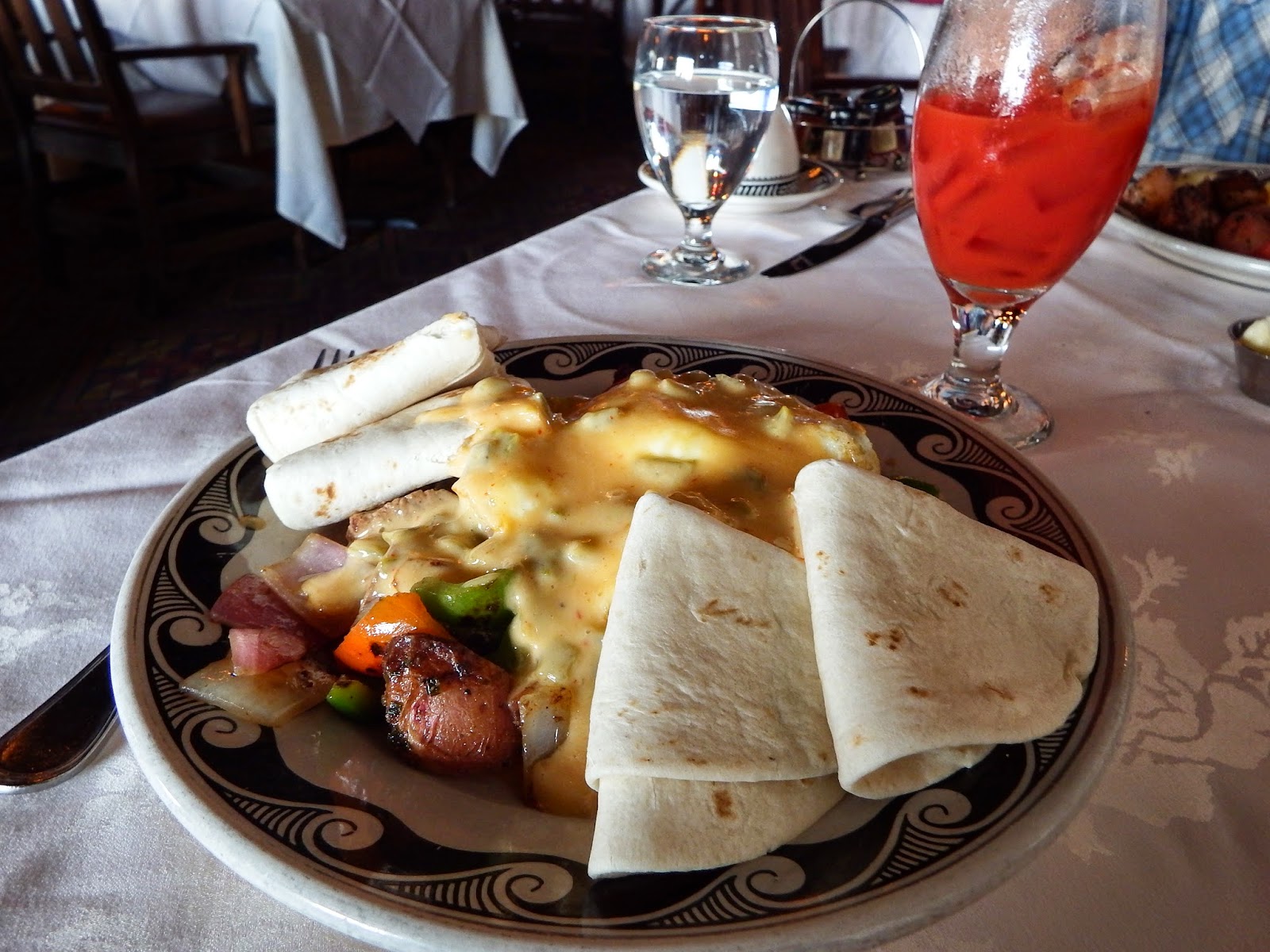 We continued our walk over to the El Tovar Lodge where we had a lovely breakfast, Allan had Prime Rib Hash, that was a first for him.   The photo does not even look like hash because the hash was not shredded like normal hash.  It was just hunks of prime rib and red skinned potatoes with grilled peppers and onions, and on top was an ancho chile cheese sauce.
Then we walked the rest of the trail out to Kolb Studio where we had a wonderful chat with the Studio Manager about the annual Plein Air event in September where Michael Chesley Johnson will again be included.
When we returned to our rv around lunch time, the thunderheads were already building up and we made it just in time before the big fat drops started pelting down.
Posted by Art In The Sun at 7:18 PM