Breaking In The New Kayaks 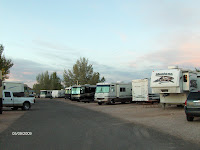 We stopped for a couple of nights in Gallup, NM where we are staying at the USA RV Park http://www.usarvpark.com/ along I-40 or Rte 66. We had read about a beautiful lake at Bluewater State Park and thought it would be a good chance to try out the new Citibots from Folbot http://www.folbot.com/ . So this morning Allan set up the two new boats taking a little extra time for the learning curve as they did not go 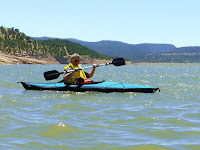 together the same way as the Yukons that we used to have. But while he was doing that, I made a picnic lunch and we loaded everything in the truck and set off. First we went to Lake McGaffey which was closer to us but it was not much more than a mudhole thanks to the local drought this year. So we went back to the highway and continued East to Bluewater State Park. The lake was very low and very choppy as well, due to some strong winds coming straight across the mesa. But we put in and the little C

itibots bobbed around a little more than the Yukons would have done but they were just as secure feeling and very easy to handle. The seats were much much more comfortable but the cockpit was smaller of course so there was not as much room for the dogs while paddling. As you can see in Allans photo, Alice is looking at him to see if he knows what he is doing and in my photo, Ned is hanging over the side ready to puke. After a bit we gave up and went ashore. The wind was way too combative and the scenery was not inspiring. But the lunch was excellent.
Posted by Art In The Sun at 3:46 PM