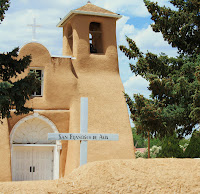 The Church of San Francisco De Asis is not one of the oldest churches but it certainly has one of the most photographed and painted exteriors. Building was commenced in the late 1700's and complet

ed by 1815. It is constructed of adobes with buttresses for stability. The shape of the church is in the form of a cross and there are only 2 windows, one on each side. Inside the church, the air is very cool and the altar is composed of handcarved retables, which are decorated wooden frames believed to have been brought from Spain.

Over twenty years ago, when we visited Taos, the plaza was a grassy area with trees. Although the roadway around the plaza was paved, the roadways leading away from the plaza were dirt. Today it is very different. The plaza has been cemented over and there are paved roads everywhere in town.
This morning we went to the Saturday Farmers Market and managed to score some free range eggs, just picked swiss chard and lettuce, and some cashew hummus. 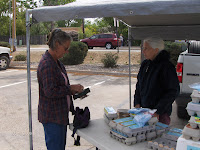 After we left the farmers market, we headed over to the Harwood Museum of Art. Burt Harwood was one of the original and now famous Taos Soci

ety of Artists that joined together in 1915 after moving to Taos from the East Coast. After Harwood died, his wife established the Harwood Foundation and Museum in his memory. Here in the main ga 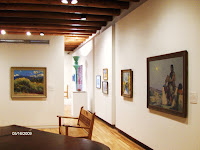 llery, seen in the photo on the left were many paintings from those original artists. One of the paintings was by Looking Elk (Albert Martinez) ?-1940. His painting, lower left, is Taos Pueblo, 1925 Oil on Paperboard. He was a former model for Oscar Berninghaus and later Berninghaus taught Looking Elk to paint, although he developed his own style and brighter palette. There was also a painting by Dorothy Brett 1883-1977, whom many of you will remember as the compan 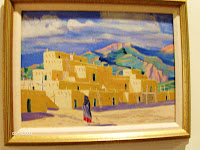 ion of D.H. Lawrence and his wife Freida. The painting in the photo, lower right, is Christmas Eve at Taos Pueblo 1961. In the 1970's many artists arrived fro 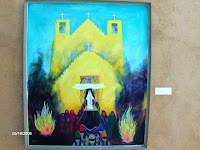 m Los Angeles including Dennis Hopper and the upstairs galleries held a special exhibition of Dennis Hopper and four of his artist friends living locally here in Taos. After the fame of the film Easy Rider, Dennis Hopper purchased the Mabel Luhan Dodge home here in Taos. Note: All photos of the art were taken with permission of the museum using no flash.
Posted by Art In The Sun at 7:24 AM