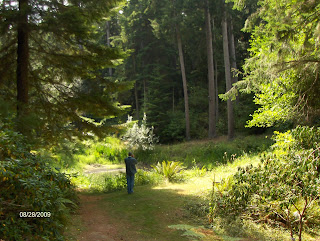 Our last few days in Anacortes were mostly taken up with housekeeping prior to departing, but we did manage to drive down through Whidby Island to Langley where we had lunch, browsed a rare book shop (where the prices were too rare for us), and stopped at the Meerkirk Rhododendron Gardens on our way home. Of course their were no rhodos blooming as it is not the season, but the pathways were fun to explore and we had the whole park to ourselves.
As we prepared to leave Fidalgo Bay RV Resort, I decided that I had been remiss in not getting any photos all month of where we were staying, so the last evening I tried to walk 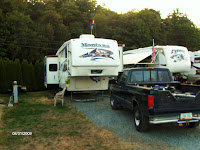 around and get some pics of the pla 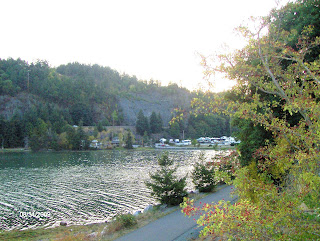 ce we enjoy so much. Our site is in the back section of the park, where all of the long term rv'ers stay. These sites are less expensive and the monthly rate includes the electricity making them reasonable for long stays. The photo on the right is looking across the tidal flats to the long term sites in the park. The photo is being t 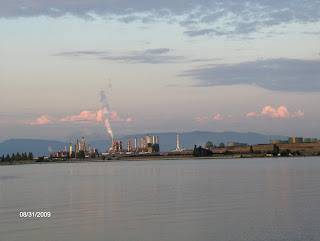 aken from the forested point of the island where there is a trail that can be taken to walk out to the eastern tip of the island and look across at the refinery. This is an interesting view and although it is true that a couple of times during the month we could smell the refinery, for the most part it was a beautiful site in the evenings with all of its lights lit up and reflecting in the white steam that was released from the sta 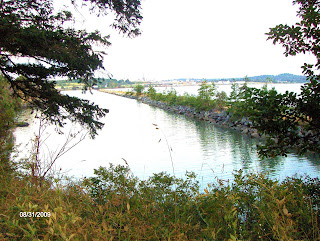 cks.
Most of Fidalgo Bay is a tidal flat and so a causeway was built across from Fidalgo Bay for pedestrians and bikes. It is part of the Tommy Thompson Trail which extends from the part of the island where the refinery is all the way into Anacortes. In several places along this trail, you can stop to pick blackberries or use the restrooms that have been placed periodically. There are also doggie bags and trash cans available. The trail is almost perfectly level and it i 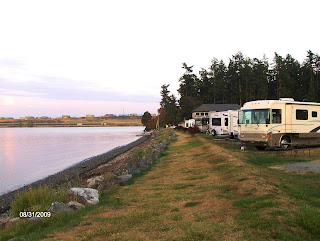 s used extensively by everyone, young and old.
For all of you rv'ers who like to pay a little more for the front row seats, this is a photo of the bay front sites with the premium prices to match the view. You can see the forested portion of the park behind all of the rigs. This park is not landscaped. It is all in a natural setting with gravel in the parking sites. All watering is done by 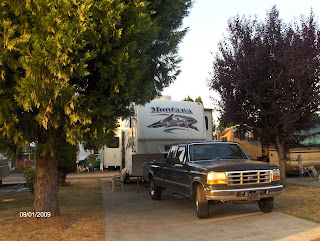 the clouds.
Today we pulled out of Fidalgo Bay and headed south down to Centralia which is about 20 miles south of Olympia. We stopped at Midway RV Park http://www.midwayrv.net/ This is a nicely landscaped small park with some perms but they all have pretty gardens. A good stopover midway between Anacortes and Portland.
Posted by Art In The Sun at 7:38 PM