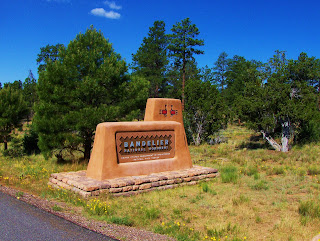 On Sunday we took a drive up to Bandelier National Monument which is adjacent to the Los Alamos National Laboratories on NM Hwy 4. This is the location of one of the original groups of the Pueblo people and it is estimated that they arrived about 10,000 years ago. Originally they were nomadic and hunted on top of the mesas but as they acquired the skills to farm corn, beans, and squash, they migrated down to the bottom of what is now cal 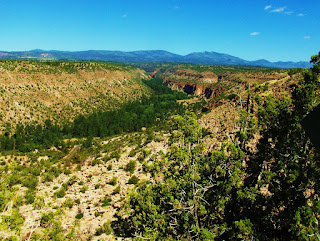 led Frijoles Canyon where there was a year round creek which supplied them with the needed water for growing crops. This creek eventually ends at the Rio Grande. The people continued to hunt on the mesa tops as well as in the canyon but also raised turkeys for the feathers as well as for food. The photo on the right is looking west into Frijoles Cyn and the southfacing (right side) cliff face is where numbers of people created their dwellings. The walls 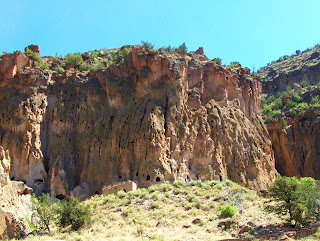 of the canyon look like limestone but are actually compressed tufa from two large eruptions of a volcano in the Jemez mountains which you can see in the far distance in the photo above. The tufa is soft enough that it erodes easily and the Pueblo people found that they could use obsidian tools to dig out holes large enough to live in. Adolph Bandelier, the self taught anthropologist who made the Pueblo people's history his life's work, called them "cavates". In the photo to the left you can see s 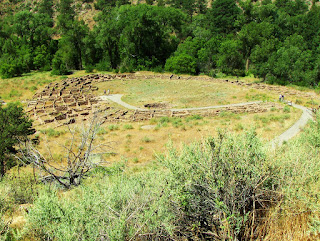 ome of the cavates and at the edge of the cliff face is one of the constructed dwellings that were sometimes as high as three stories. On the canyon floor were numerous pines that were used as roof supports for the houses and also for the kivas. The pines were also used for making looms. Blankets and clothing were made from woven yucca, cotton, and turkey feathers. It appears that some of the people preferred to live on the canyon floor nearer to the creek and there is an entire village which is partially excavated showing rooms and 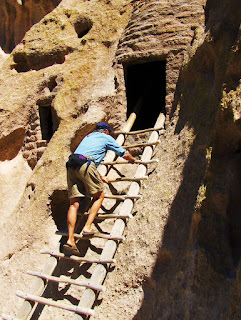 kivas. The photo above right was taken while we were on the cliff face looking down. The village below was large enough for 400 people but archeologists do not want to excavate the whole thing as the building materials are soft and the winds in the canyon erode what has been revealed very quickly. For those people up on the cliff face, they used pine to make ladders to reach their cavates. Some of these cavates were large enough to be a kiva and probably held about 30 people. Other cavates were only large enough for one or two people to sleep with smaller niches for storage. 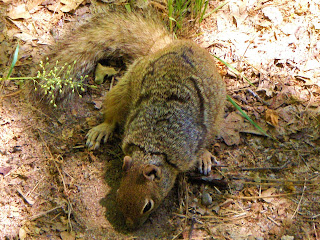 The entire walk was about 1.5 miles but we walked an additional 1 mile path to the Alcove House where there is a 140 foot climb up 4 different ladders. After we got there and took a look at the climb, both of us decided that we would not go up. The walk was not a loss however as we were lucky to see some wildlife as we strolled through dappled sunlight nex 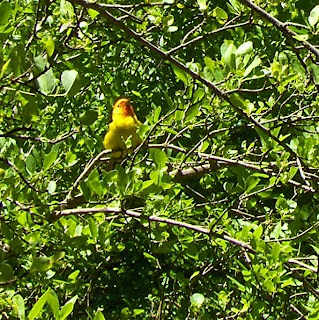 t to Frijoles Creek. The first was a rock squirrel. I had hoped to see an Aberts Squirrel with the little pointy rabbit ears but no luck, just the ordinary looking rock squirrel who kindly posed for a photo. But just around the corner we spotted a flash of gold in the trees above and were lucky enough to see a Western Tanager. He was a beauty and hung around for a few moments, long enough that I was able to get a photo of him peering down at some possible predators. He was the perfect ending to a wonderful warm sunshine day in a beautiful canyon full of history.
Posted by Art In The Sun at 6:41 AM