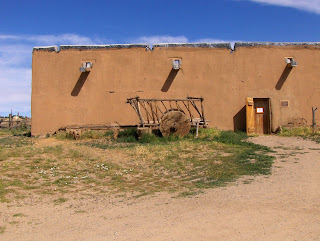 At the Fechin Museum we had purchased a 5 museum pass, so yesterday we headed out to the Hacienda de los Martinez, a walled enclosure built in 1804 which served as the home of the Martinez family and the final stop on the Camino Real trail from Mexico. Martinez was a trader and his caravans moved goods from New Mexico down to Mexico and returned with Mexican supplies. The walls were built of 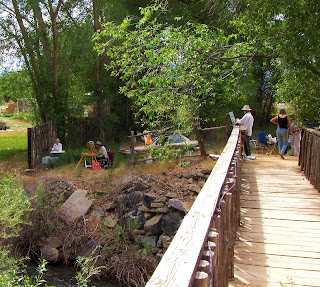 two foot thick adobe bricks and had no outside windows as many haciendas in the area were attacked by Indians. This was a stark and primitive existence and although the rooms were filled with old objects of the past such as looms for weaving, wooden plows, and cases of rifles/muskets....we did not linger. Outside there was a small creek and a group of plein aire painters were hard at work capturing the beauty of the area. They were working in all mediums; oil, watercolor, and even pastels. This is the second time we have seen plein aire since we h 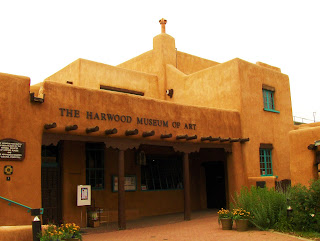 ave arrived in Taos as there was also someone at the farmers market capturing the scene in acrylics.
We then made our way into town to see the Harwood Museum which we had visited last year. The Harwood is the former home of the artist Burt Harwood and his wife. Harwood was one of the original Taos Artists. The main gallery is a permanent, rotating display of the art from the original Taos group of painters and the remainder of th 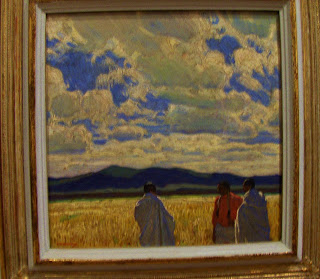 e galleries are exhibitions that are always different. Last year we saw the art of Dennis Hopper and this year there was an exhibit of Gene Kloss, an early printmaker. But we usually spend the most time in the main gallery where we try and absorb the techniques of the early Taos artists such as E. Martin Hennings. Hennings work is sold everywhere in this part of New Mexico and we have purchased several small cards of his work which is all we can afford. He captures the big 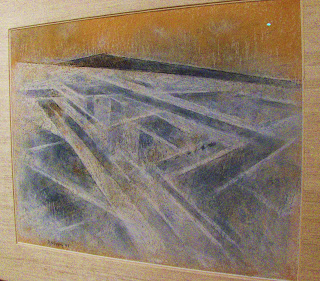 skies and long open spaces perfectly as you can see in the painting above right. We also saw a pastel painting (left) by Andrew Dasburg which he painted in 1957. It is a winter scene looking west and it has elements of the more modern painters of the time, almost cubist. Definitely an abstract of the landscape. In 1957 there was not the selection of pastel colors that we have today, but he apparently only needed a small selection to indicate the freezing winter of the mesa. 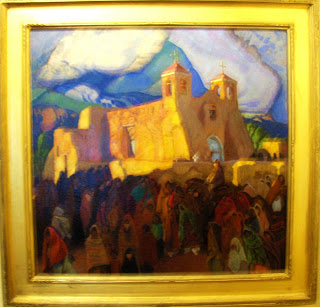 And finally we walked up the street towards the plaza to visit the Ernest L. Blumenschein Home and Museum. For those of you who did not already know, it was the serendipitous car accident outside Taos in 1898 of Blumenschein and Bert Phillips, two artists who were heading to Mexico to paint. After being delayed in Taos, they determined to stay and became the nucleus of the Taos Artists who began coming from the East to join them. Blumenschein on one of his many trips to Pa 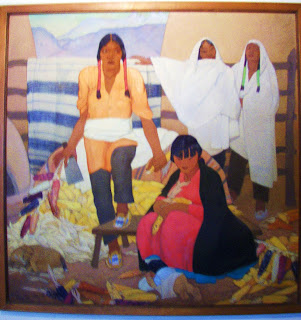 ris, married a New York artist who had had comparable success to Mary Cassatt in the Paris Salon. While in Paris, she worked as a successful illustrator of books and magazines to provide an income for them. After the death of their first child, she accompanied him to Taos where they made their home. Although he went on to become a famous and successful artist (see one of his paintings above right), she mostly gave up her painting to raise Helen, their second child and create a home where all of the Taos Ar 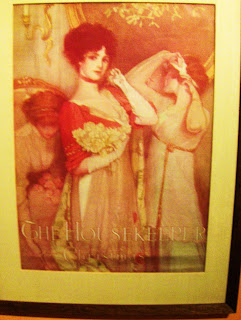 tists gathered in the evenings. Later in her life, she finally went back to painting. One of her illustrations is to the right, and one of her later paintings is above left. An interesting side note is that although their daughter Helen was also trained in art in Paris and had two artistic parents, she never managed to acquire the expertise to become successful. This was the same thing that happened to Nicolai Fechin's daughter as well. She also gave a try to painting and woodcarving but ended up as a dance instructor.