The Town That Never Was

Yesterday we set off to Los Alamos to see the town that never was, exhibited in the Bradbury Science 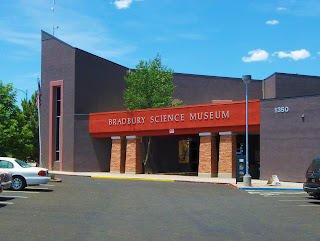 Museum. This is where Scientists from Europe and America gathered together to create an atomic bomb in order to stay ahead of Hitler's War Machine and try to end the war. This town has always held special significance for me as I had personally met Glen Seaborg at a science conference in Palm Springs where I was able to hear him lecture and shake his hand in the reception afterward. He was the Berkeley Physicist who discovered Plutonium which is the heavy metal created by nuclear fission that is in the atomic bombs. He kept the first sample of Plutonium in a cigar box and it was about the size of a quarter. I have also read every book written by Richard Feynmann, another physicist who lived in Los Alamos in the early days of creating the first atomic weap 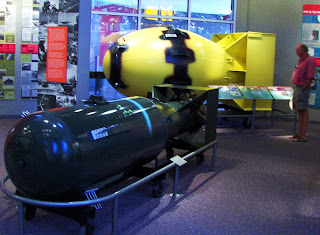 ons. In conditions that were not always perfect, these men and women came together to create a weapon that would end the war.
The first atomic bomb was originally named the Thin Man to honor President Roosevelt but it later became known as Little Boy. This is the bomb that was dropped on Hiroshima. The second bomb was a different design and was called Fat Man to honor Winston Churchill and it was dropped on Nagasaki. Although many people deplore the creation of weapons, it was a time when people came together in a common cause and a number of these scientists went on to develop many other uses for nuclear energy after the 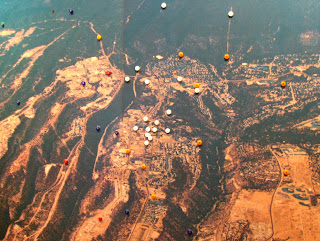 war, many of which are indispensible in the fields of energy and medicine today.
Today Los Alamos is home to many companies who work together and research new capabilities for nuclear energy and new ways to store it safely. The research facility used to be where the town is now but as the town grew around them, they moved over to the next plateau to the south of the town. In this topographic map, the town is on the middle plateau where all the little white dots are located and there are residential areas spreading onto the plateau to the right as well. The research facilities are on the plateau to the left where there are small red and blue 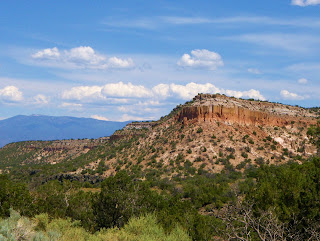 pins. There was no town originally, it was just a boys ranch school and ranches. The early scientists used the boys school as the first research facility until more buildings were built. The plateaus are at about 7000' elevation and the canyons between them were steep, so all of the homes are built on the top of the plateaus. The town is located in the Jemez Mountains and the views up and back from Santa Fe were tremendous. While we were in Los Alamos we visited the local art center and much of the work there was of the surrounding mountain vistas. One pastel piece that we noticed was of Aspen Trees and highlights were created with metallic pastels.
Posted by Art In The Sun at 6:52 AM