Yesterday we arrived at Cherry Hill RV Resort in Maryland where Allan promptly began investigating our rv brake troubles. For the last couple of days, the rv has been bucking and jerking everytime we touched the truck brakes or used the turn signals. We found a nearby rv parts store and Allan found the parts that he needed to rewire the plug from the truck to the rv. Hopefully that will take care of the problem.
Today we caught the bus here at the rv park which took 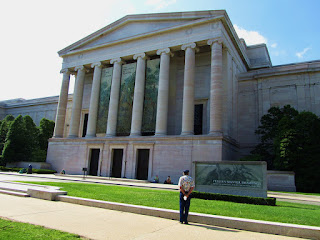 us to the Rail Station. We rode the train into DC and got off on the Mall about two blocks from the National Gallery of Art. The photo above left is only the West Building, there is also an East Building, so I had looked online for what was in each gallery and we concentrated on seeing the Impressionists with a few exceptions. One of the exceptions was the only Leonardo da Vinci in Amer 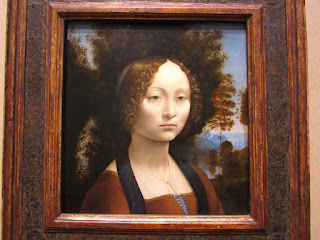 ica. It is a portrait of Genevra de' Benci (a girl who seriously needs to get out in the sun), who is sitting in front of a juniper bush which alludes to her name. I should mention that we were allowed to take as many photos as we wanted and we could also get right up and peer closely at the paintings. This particular painting had its own guard but the remainder of the paintings in the galleries had roaming guards. 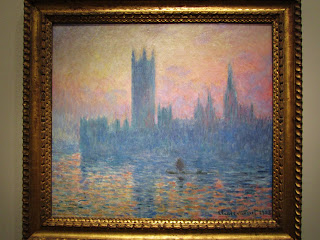 There were examples of many famous paintings by many famous French Impressionists such as Claude Monet (1840-1926). He had several examples of his work including one that is in most books about him entitled "Houses of Parliament, Sunset" (see lef 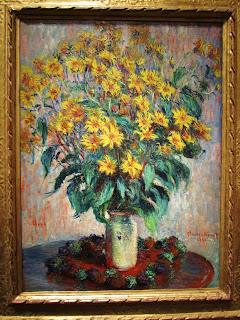 But we enjoyed seeing at least one of his lesser known paintings "Jerusalem Artichoke Flowers" (right) painted in 1880. What was extraordinary about his paintings was the brush work which is not noticed so much when you see the painting in a book.
If you look closely 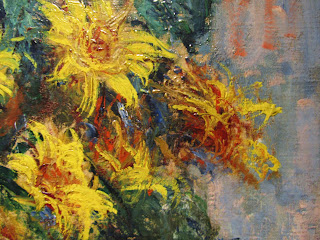 at a detail from the painting, you can see all the little brush strokes of color that is not only in the flowers but is in the background as well.
The vase that is holding the flowers has reflected light of pinks 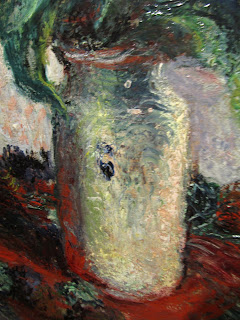 , yellows, and greens... while the shadows are done in violet, red, and blue. I remember when Allan and I took a workshop with Liz Kenyon which was all about the color residing in the shadow shapes of an object. This was a beautiful example of that idea. This was also the area where Monet had his darkest darks and his lightest lights. When you first look at the painting, you see all the flowers, but as you look further, your eye is drawn to the vase and the glow that is coming from behind the vase.
While we were walking around the museum today, we saw an artist copying a painting. It wa 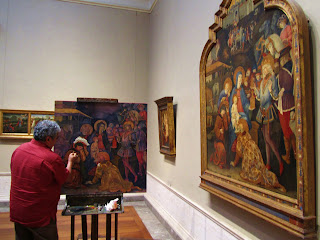 s a very involved scene from the 15th century and he had already put in 60 hours of work, not to mention the study and research of the painting prior to painting. In addition to the color pigments, this painting had thickened gold leaf crowns, swords, and buttons. He still had a long way to go. And after seeing Monet's paintings today, so do I.
Posted by Art In The Sun at 4:48 PM