Whenever we stay in Washington, our time just seems to fly by.  A couple of days after the garden tour, we drove up to Birch Bay to see Barb McGuire and her husband Dick.  They have a cosy and delightful place within walking distance to the bay, just north of Bellingham and south of Blaine.  Dick has fixed up a space in the garden shed to be Barb's studio for the summer and she has all sorts of projects on the wall that she has been working on.  Dick drove us all to Peace Arch State Park to see the giant arch straddling the border between Canada and the U.S.  The gardens in the park were beautiful and we got lots of photos before heading over to the Semiahmoo Resort on the Semiahmoo Bay for lunch.  It was a great visit and we are looking forward to seeing Barb again this coming Fall at our pastel meetings.

Later that same week, we took off on a tour of Farm Stands located in the area east of Bellingham.  Because of all the rain this year, many of the stands were not open yet, but we did find several small stands with baby carrots, sweet shelling peas, strawberries, and lettuces.  There were miles after miles of farms in this area and many of them had views of Mt Shuksan to the east.  One of the reasons we enjoy this area so much is the availability of fresh produce and I wish I could say that this has led to slimmer figures, but unfortunately there is also an abundance of great bakeries where we never hesitate to stop and sample.

Our last excursion before leaving Anacortes was an art workshop with Mitch Albala on Whidby Island.  We already owned Mitch's book on Landscape Composition and we were looking forward to meeting him and hearing him in person.  Allan was hoping to ask him some questions about thumbnail sketches and it turned out that the entire two hours was about exactly that issue and more.  Mitch really stressed the importance of composition and called it the "front end" of painting.  Although the weather was gray and drippy and cold, and we were standing for two hours on the deck of the Captain Whidby Inn on the edge of Penn Cove, his talk and demo were so interesting that I didn't even register how cold I was until we got in the truck to go home.  For anyone reading this that is in our pastel group, there will be a complete writeup in the August newsletter.

The last five days have been spent in Seattle where we always seem to do exactly the same things that we did the previous visit, but never get tired of doing them.   We always stay in Bothell at the Lake Pleasant RV Park which is situated around a lake with ducks and weeping willows.  From here we head out each day to visit one of our favorite spots.  When we checked in, the manager noticed we had dogs and directed us to an off leash dog park which was on the beach in Edmonds.  So that evening we headed over with Elsie and Murray so that they could experience the beach.  It was not a long sandy beach unfortunately, more rocks and driftwood piled around, and the dogs were mostly large rambunctious breeds who swam out into the ocean to bring back logs (not sticks).  Our dogs were fairly intimidated by all this action and stayed pretty close to us and we did not stay long.

The next day we drove down to the International District and wandered around taking photos of buildings before going into a huge asian market, bookstore, and food stall area.  We were able to find some imported Japanese Plum Wine, Macha Green Tea, and a book on Curries.  Since it was almost noon, we headed to the food counters where I got  a chinese combination plate and Allan got some of his favorite food, Japanese beef curry.  Then we went to the downtown area and scouted out all the used book stores finding a just a few books to take home.

Saturday is the prime farmers market day, and one of the biggest in the area is in Redmond.  We headed over there early in the morning and purchased eggs, rainier cherries, beets with greens, scones, soaps, and tamales, just to name a few items.  It was a good mix of produce, crafts, and ready made food with music in the background provided by a local guy with his fiddle.  After that we went to the Trader Joes in Redmond to stock up on coffee and other essentials as there would be no TJ's on the Oregon coast.  Finally we crossed the floating bridge over to the University district where we found one more used book store.  Needless to say, we found more books to bring home. 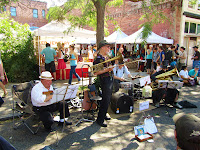 On Sunday we drove to Ballard to see the Hiram Chittenden Locks, but first we wandered through the Ballard Farmers Market mostly to listen to all the music.  There were probably about 15-20 music groups or individuals playing jazz, classical, or country music.  We had to walk past beautiful veggies and fruits while we were listening, but we couldn't fit anymore produce into our pint sized rv fridge.  Most of the stores were open, there were jugglers, arts and crafts, and magicians.  It is quite a show.  Afterward we went on over to the locks and then across the water to the Fisherman's Marina for Allan to get photos of boats.

Our last day in Seattle was spent at Pike's Market, mostly to get photographs, but also just to sample the food and be out in the sunshine.  That's right.... I forgot to mention that we have been extremely lucky in the weather for the last few days.  Sun and more sun.  It has been wonderful after an extremely rainy month in Anacortes.  So spent a lot of time in the Italian Grocery, took many photos of fish, found a used book store on the lower level, and had lunch at Kell's Irish Pub where Allan had some kind of potato and sausage dish called Coddle, and I had my usual Shepherd's Pie.

Tuesday morning we headed out for the coast, stopping at the Elma RV Park, in Elma, WA for the night.  After setting up, we took the dogs and drove over to Westport where Allan got even more photos of boats, we ate delicate and delicious halibut and chips, and stopped at a long deserted beach where Elsie and Murray could really run off leash without any intimidating large dogs around.  They were flying around the sand, running full tilt, with Elsie jumping over Murray and taking off like the wind.  Of course they ate some sea creatures before we could get to them, but we had such a good time watching them have a great time.  A good end for our Washington visit.