BEACH.. BISHOP...HOME...AND BACK ON THE ROAD AGAIN.

It has been quite a while since my last post in Grover Beach, California  where we became distracted over some issues from home.  Mainly a couple of letters from the management of our Park.  First to let us know that our CRV had a flat tire and had to be repaired asap or be towed.  We called one of our neighbors who went over and filled the tire with air, but then not even a week later, we heard that it was going flat again.  On top of this, we got a second letter saying that our yard had weed issues and so a different kind neighbor walked around our property while on the phone with me and found only one two-inch weed underneath our palm tree.  After a conversation with our manager, I found out that the inspection had been done over two months prior and she was just sending out the letters.... all while over 60% of the people in the park were away for the summer.  If the weed problems were not taken care of they intended to send someone to do it and charge the owners.  A scam, hmmm, maybe.  Managerial incompetence, definitely.  Either way, it was stressful and after talking it over, we decided to cut our trip short and head back towards home.

We couldn't go straight home because we had already purchased new flooring for the living area of the rv and we can only keep the rv for 48 hours in front of our home.  So we kept the Bishop reservation and cancelled our Mono Lake reservation.  We stayed in Bishop just long enough for Allan to rip out all the old carpeting which if everyone remembers from our trip last summer, had gotten completely soaked from a water leak.  Add also that we have two dogs and the carpet is over 12 years old.... the old carpet had to go.  We purchased bamboo flooring from Home Depot and other than a few minor issues, all went well.
We then headed for home in a marathon run, leaving Bishop at 6 in the morning.  Arriving at the Oasis RV Resort at noon, where we got set up, and headed off to the best buffet we have ever had in Las Vegas at a casino called M.  Our total bill for the two of us was $34. and that include wine and/or beer.   Then back to the rv for a nap, then a swim, and then we unhooked the rv and departed about 6 pm to arrive home at 2 in the morning.  A very long day but made doable by the afternoon break.
Good thing we got home to take care of things as the following day our water line for the irrigation shot up a geyser of water which we then discovered had been chewed by a coyote laying under our shrubs while we were gone.  So now, the tire is fixed, the water line is fixed, there is not a single weed anywhere.  So now what?
Well I called Ruidoso, NM and we could not get in to the park we wanted until August 9th, so we decided to load up all of our already read, used books to take to Coas in Las Cruces.  We packed up the rv again and headed east on hwy 60, then SE on hwy 70 and reached Las Cruces in the afternoon.
We dropped off 6 large bags of books at Coas and ended up walking away with 3 new bags of used books.  For me, it was several mysteries, about 10 Books on Books, and a few travel essays.  For Allan, it was The War.  He loves personal accounts written by people in the War.  Coas is one of the best used bookstores in the west and they take any book you bring in.... for credit of course. 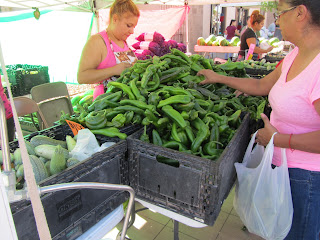 We also went to the farmers market on Saturday, with 7 long blocks of vendors, mostly crafts, but plenty of produce, including the famous Hatch Chiles, which you see in the photo to your left.
While in Las Cruces we dropped into the Art Museum which was showing an exhibit on plastics.  The plastic bag that this woman is holding in the photo will take 450 years to completely break down.  Over 25 cities in the US have now banned plastic bags in stores.  Where we were staying in San Luis Obispo county in California, they did not allow plastic bags and everyone brought their own.  Since we had plenty of Trader Joe's bags, we had no problem and actually prefer to use our own bags to help the environment as best we can. 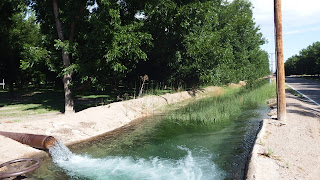 We took a drive south along the Rio Grande to see the farms and orchards for photos.  Las Cruces farmers grow cotton, sunflowers, pecan trees, corn, and of course, peppers, among other things.  The pecan trees are watered by flooding and canals are everywhere... bringing the much needed water.
Since we had a number of days just to relax and hang out, Allan decided to replace the very old scratched plastic sink in our bathroom of the rv.  We headed off to Home Depot again and they had one that was the perfect size.
Today is our last day here, so we are going back over to St.Clair Winery for lunch.  We have eaten there once already and they have really wonderful food, sometimes with a hint of Hatch Chile, and of course, some lovely wine.  Allan purchased some of their Pinot Grigio last time we were there.  For those of you in the Phoenix Area... if you want to taste their wine, it is labeled as Kokopelli in Arizona but is actually St. Clair wine.  The owners of St. Clair go back five generations, leaving Poland in the 1800's for Algeria, then moving to the Burgundy region of France, and finally ending up here in Las Cruces where the terroir is similar to the vineyards they had in Algeria.   So we will be having a great lunch on our last day here.  And tomorrow we are heading up to Ruidoso, NM where the temps are in the 70's, we hope.
Posted by Art In The Sun at 8:07 AM