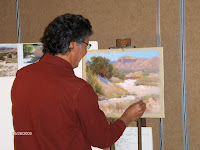 Today from 9-4 was the workshop with Lorenzo Chavez. Lorenzo is from Denver, CO and paints the Southwest in a style reminiscent of the Early Cowboy Paintings or perhaps the original Taos Artists Group. He works on Canson paper and uses a variety of pastel brands. He chose a photo of an arroyo with mountains in the background and proceeded to establish a composition using conte crayon. He then put in the darkest darks and started to build the first layer of lightly applied pastel color. He continued to build up color and highlights until the painting was balanced and the focal point was well established. http://www.lorenzochavez.com/ 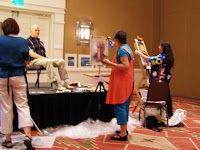 While I was in Lorenzo's workshop, Allan was attending the demonstration by four of the Aus 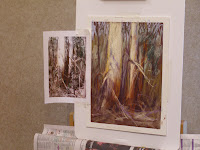 tralian Pastel Artists attending the conference. Three of the artists; Tricia Reust, Penelope Gilbert-Ng, and Regina Hona, all painted a pastel portrait of the husband of the fourth artist, Barbara Beasley-Southgate. Barbara did a painting of eucalyptus trees from a photo. http://www.reginahona.com/
http://www.penelopegilbertng.com/
http://www.triciareust.com/ 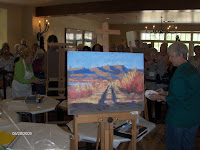 After the workshops and demos, there was a paint- around with Maggie Price, Alan Flattman, Urania Christy Tarbet, Sean Dye, and Rae Smith. We had never seen a paint-around before and it was fun and exciting to watch. Each artist had 10 minutes to start a painting from a photo they had brought. At the end of the 10 minutes everyone moved to the right one place and continued on the other persons pa 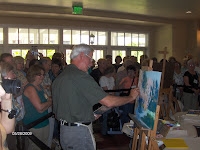 inting using their neighbors pastels for another 10 minutes, and so on around the circle. When they finally returned to their own painting, they had a final 10 minutes to f 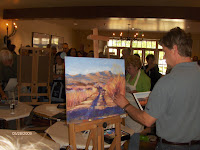 inish any last minute details. Each of the paintings are signed by all 5 artists and will be auctioned off with the proceeds going to a benefit for new pastel artists. After the paint-around was finished to a rousing applause, everyone got a refreshment at the bar and entered the dining 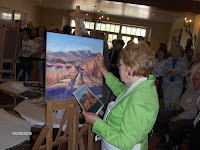 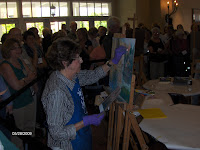 t the buffet. We had a salad and roast pork with potatoes or rice, green beans, fresh fruit, coffee and dessert. The pastel artists seated around our table were from California, Colorado, Alabama, and Arizona (that was the two of us). As we made our goodbyes for the evening, we also looked forward to seeing everyone tomorrow for more demos and THE VENDORS.
Posted by Art In The Sun at 8:26 PM