Friday morning both Allan and I listened to Michael Chesley Johnson on Maritime Painting. There was a slide show with many of the scenes where he lives on Campobello Island. He also showed us many of the paintings he had 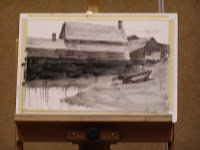 done in the various settings. His demo focused on making a value underpainting in 3 shades of gray pastel and then painting everything with water to establish the values. After this was fairly dry, he began placing pastel colors on the painting that had the same values as the gray underpainting. This was a method that he teaches all beginners. So I guess Allan and I will be giving it a try.
After his workshop both of us went to look at the vendors and we could not pass up the Terry Ludwig booth with all of his lucious pastel colors to tempt us. Then we decided to get the Heilman boxes to hold our pastels since our current method is awkward with bags and boxes everywhere in the rv. And of course we had to stop by the Art Spectrum booth to pick up some san 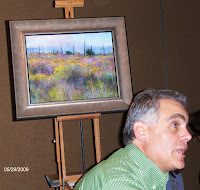 ded paper. Plus a few odds and ends.
Later in the day, I had one more demo with the famous Richard McKinley from Oregon. He also was focusing on underpainting but his method is us

ing watercolors to create a transparent color underneath the pastel painting which has serendipitous effects in the final painting. He calls it pentimento, the ghostly previous early life of the painting showing through. He also explained how he sets up his palette with the neutral colors in their own areas over to the side. As soon as we got home we started setting up our new boxes in the same way. It never hurts to try the methods of the masters.
Posted by Art In The Sun at 1:43 PM