We had been looking forward to returning to Leavenworth, WA and arrived at Icicle River RV Resort http://www.icicleriverrv.com/ for a one week stay only to discover that there was NO cell phone signal and worse yet, NO aircard signal either. This was tough news. We could tough it out through cold weather, fog, low amps, uneven leveling of a site, and other annoyances of the road, but who knew that there were some places still here in the 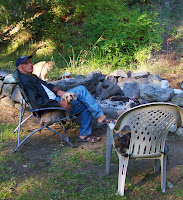 US of A without even a wisp of a signal. For a full timer who depends on the internet for banking, corresponding with relatives and friends, daily news, researching destinations, booking reservations, and many other conveniences, having no internet meant that we would be moving on at the end of the week. In the interim, Allan had his campfire every morning with his coffee and we enjoyed going into town a couple of times for a Bavarian bratwurst and beer. For those of you who have not visited this town yet, we highly recommend seeing it someday. It is a former lumber town which died and the townsfolk decided to transform their town into a Bavarian Village and actually sent people in the town to Bavaria where they learned to make sausages, remodel buildings in the style of the alps, or bake bavarian pastries. The whole town is invested in this transformation, from the Wells Fargo Bank to individual homes. The rv park where we stayed had no

signal, but the town itself has 4 bars.
We took a day trip up Hwy 2 to Deception

Falls and walked the 1.5 mile trail loop along the river and up to the base of the falls. It was an easy walk and we crisscrossed the river several times so we were able to get quite a few photos for the upcoming winter. Another day trip was North up Hwy 97 through Lake Chelan up to Twisp and Winthrop. We had read about these towns years ago and had always wanted to see them. Winthrop looks like a town out of the old west and was packed with tourists walking the boardwalk sidewalks. Twisp is a cute 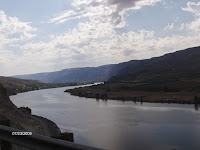 little artsy town and Lake Chelan was quite a large town circling around the south end of the lake. We had driven from Wenatchee to Lake Chelan along what appeared to be a long river, but it turned out to be Lake Entiat. The scenery for the entire drive was spectacular but it sure was a long way from anywhere. We noticed that almost everyone had RV's sitting in the driveway, probably for their snowbird escape to Arizona in the winter.
With just five days remaining before our month long reservation in Anacortes, we decided to head to Bothell and stay at the Lake Pleasant RV Park, a 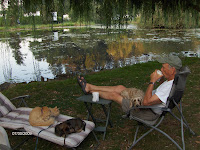 nother returning visit for us. This is a beautiful little park situated around a lake that is designated as a wildlife habitat. There are walking trails, clean restrooms, and privacy sites with foliage between the sites. This year we got a site under some weeping willows along the banks of the lake where Allan had his coffee in the morning while the ducks breakfasted on the underwater plants. We took this opportunity to ferry over to Bainbridge Island so that I could stock up on 4 pounds of the absolute best granola from the Blackbird Bakery. I guess it is a tossup on whether it costs more for the ferry ride or the postage I pay when they mail it to me. But at least with the ferry ride we got some fresh air, sunshine, and a wonderful lunch on the island. We

spent another day at Trader Joes stocking up on other necessities and today we went to the local Bothell farmers market which was very small but we still managed to find fresh lettuce, raspberries, blueberries, and boysenberries. This evening we attended the Friday Night Summer Concert at the Park in Bothell by the river and heard Shambala. They are a band that plays 3 Dog Night songs and they were 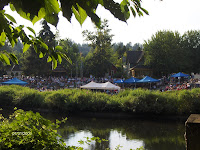 fantastic. Many of the old timers in the crowd were singing the songs along with the band. A man next to me said that the very first record he ever purchased was a 45 of Black and White. They ended the concert with Jeremiah and the whole crowd was singing the refrain. My favorite was the song they played from Hair. As you can see from the photo on the left, the concert was jamming with folks and the setting along the river is perfect for listening to music in the twilight with the children dancing like elves. Tomorrow we move to Anacortes where we are looking forward to meeting up with Jim and Nancy for a few days.
Posted by Art In The Sun at 8:31 PM