We arrived here in Anacortes at Fidalgo Bay RV Resort http://www.fidalgobay.com/ on Saturday. That evening we had dinner at the Greek Island Restaurant with Jim and Nancy who had arrived on Saturday also, although they are staying at the Casino RV Park just up the road from us. Allan had the Greek ribs which were not in a barbeque sauce, instead they were dry roasted with seasonings and the meat was falling off the bone. He gave them a thumbs up. Jim had the lamb shank which he said was very good, Nancy had the hummus with a salad, and I had the Greek chicken which was very tender. On Sunday, Allan and I headed over to Camper World to get some parts and I ended up getting a new beach cruiser bicycle which folds in half. We have already taken 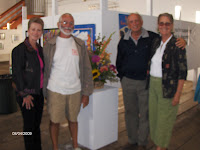 some short rides and it is working out great. On Monday we visited the Food Co-op in Mt Vernon and it is fantastic. Clean, well stocked, and friendly. Tuesday we headed up to Bellingham to a used book store where we were able to unload some of our books for trade and it is a good thing because we both found many literary treasures to purchase. Tuesday night we met for dinner with Jim and Nancy and then headed to the Port of Anacortes for a concert by Los Pinguos, an Argentina band. Their music was lively and fun. I tried to capture a short sequence of their music using my point and shoot. Having never done this before, you will have to excuse any shortcomings in the video, but here is the tail end of one of their songs.