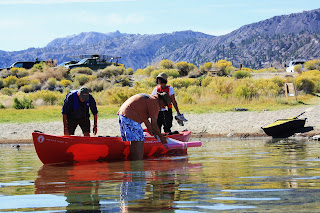 Two days ago, we had the perfect day for putting the kayaks into the water of Mono Lake. There was no wind and the lake was glassy smooth, so smooth that just a gentle stroke of the paddle and we were gliding along for minutes at a time. We put in at Navy Beach and with a little adjustment of the outriggers for Mark and Renita's canoe, we were off to explore the Southern edge of Mono. As we were launching our craft, there were thousands of the li 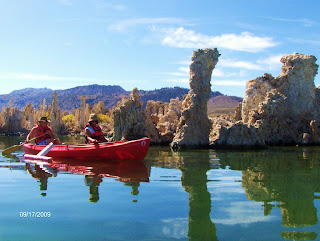 ttle black flies that are so important to the ecosystem of this lake, but they were not even interested in us because they are all vegans. They crawl over the rocks and submerged tufa eating the algae that grows underwater. The flies along with the brine shrimp are important food sources for the many birds that come to Mono Lake to nest each year. Osprey use the tufa towers to make their nests and we could see many abandoned nests which will get rehabilitated next season for the next crop of chicks. The California Gull makes the long migration from the c 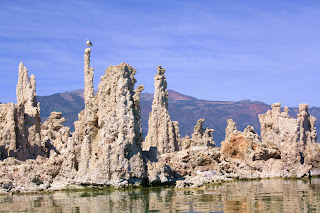 oast each year to build their nests on the islands of Mono Lake which is why it is so important to keep the water level high enough so that there is no land bridge from the mainland to be used by predators. In the photo to the left, you can see a lone gull who has not flown back over to the coast yet. He is keeping a watchful eye on the paddlers below. Most of the other gulls had already departed although we were lucky to see about 20 earred grebes that were still in residence as they dived for the brine shrimp that were floating like snowflakes by the thousands in the saline water. 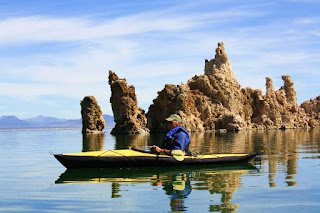 Allan in his yellow Folbot Citibot kayak is gliding along past a tufa tower in the photo to the right and in the photo below left, I am in the teal kayak taking pictures. This is only our 4th outing in the Citibots and we are still working out some kinks that they seem to have. Our previous Folbots were Yukons and we loved everything about them except they were a little too heavy for me to carry and they took up a lot of room in the underneath storage of the RV. The Yukons tracked better in the water 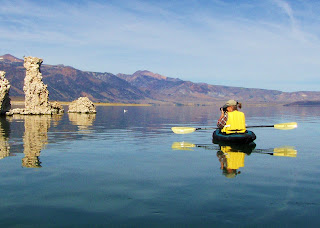 and they had a larger cockpit, allowing you to turn around or even stand up if you watched your balance. We could carry more in the Yukons as well and they felt generally more stable. But weight was an issue for us and we used the Folbot Forum to sell the Yukons and we purchased the Citibots this year which only weigh 24 pounds and come in a backpack for easy portability. However the engineering of the frame is not the same as the Yukons. The frame has to slip into one end of the Citibot and then a zipper is employed in the stern to fasten the skin back together. This is not as easy to assemble as the Yukon. Also the seat of the Citibot has not stayed in position as it should and we have had to use velcro tape to make sure it does not fall back into the stern 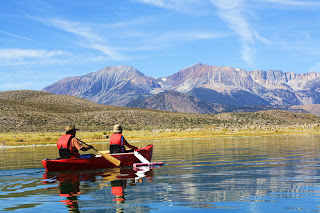 . Both Allan and I have had the seat "fall in" while paddling and it is disconcerting to say the least and almost impossible to get it fixed while in the boat since the cockpit is too small to manuver around much. But on the other hand, I can pick up the whole boat and walk it down to the water by myself and that is a big plus. And it uses only a small amount of space in our RV. I guess there are pros and cons for everything but the end result is that we can get out on the water in beautiful locations with good friends that also appreciate the beauty of the sierras not only seen in the distance and but also in the lakes reflection.
Posted by Art In The Sun at 4:44 PM