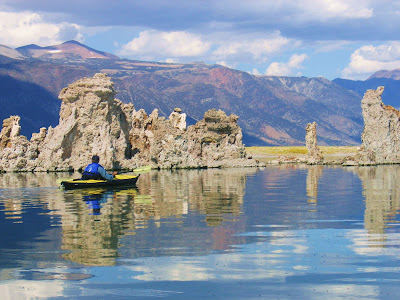 This last weekend we had a visit from our daughter Stacey and son-in-law Pat all the way from Eureka, California. Pat, who backpacks in the Sierras each summer hoped for one last walk in the high country before the long winter set in. On Saturday morning, while Stacey and I were in Mammoth shopping, Allan and Pat took the kayaks to Navy Beach on the shore of Mono Lake to paddle around the tufa towers. Allan is in the photo to the left getting a close look at the tufa. A s 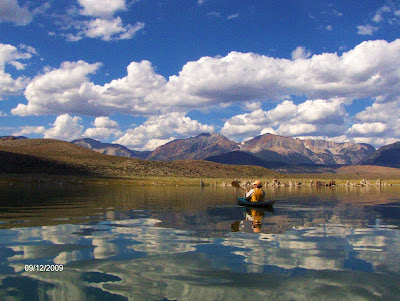 hort prior trip to the ranger station had alerted them them not to go near the osprey nests but there was plenty to see otherwise. Allan mentioned the thousands of brine shrimp swimming below them like snow underwater. And they saw numbers of gulls that hadn't left for the coast yet. Pat is in the kayak to the right paddling in the reflections of clouds that later turned to a five minute rain shower. They finished off their expedition with a great hamburger 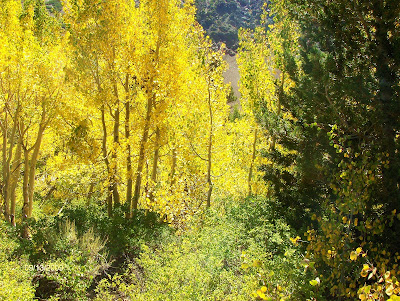 at the Mono Cone, don't miss it if you are in the area.
The following day we made a picnic lunch and headed up to Virginia Lakes where the aspens were already turning their fall colors. Pat packed his picnic lunch into his day pack and packed up his fly rods to walk even further past Virginia Lake along a fairly level trail to Blue Lake and then cross country up and over a ridge to Moat Lake at 10,573 ft. While he was walking and fishing, Stacey and I tried to capture some of the beauty of Virginia Lake with water color and paste 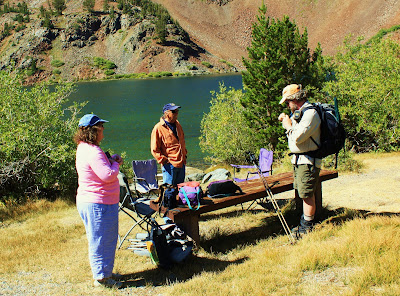 l. Allan walked all around Virginia Lake and Lake Trumbull taking photos for our winter painting. After a while, the three of us had our lunch while watching the other fishermen on the lake catching trout and keeping an eye on the little ground squirrels running around begging for food. We headed back after lunch and Pat returned later in the early evening with plenty of photos of his short trek. This last photo is of Blue Lake with Upper Virginia lake in the far distance. W 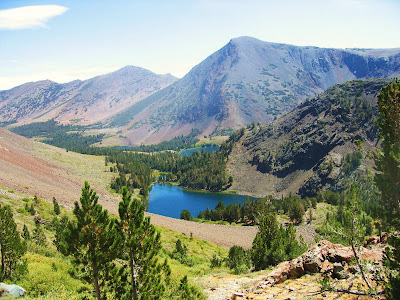 hen Pat returned to civilization, we all got together for Polish dogs and chili beans while watching the football game. Stacey and Pat called it an early night as they were getting an early start in the morning to head back to Eureka. We all had a great visit and Allan and I were really glad they took some time to come and hang out with us for a little while.
Posted by Art In The Sun at 6:11 PM