An Artful Sunday In Taos 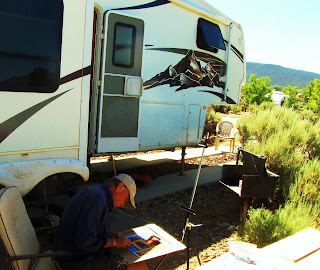 Sunday was a day to hang around the rig, do some cooking, and finally start a painting of one of the many photos we had been taking. Allan got the Carne Adovado started, which had been marinating for the past 24 hours, and headed outside with his pastels. He set up his pastel box on the picnic table and started laying on the colors he had preselected for a painting of the Chimayo Santuary bell tower. 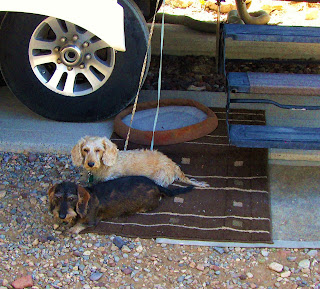 While Allan worked on his painting his two loyal friends hung out with him, waiting patiently for him to finish so that they could go for their walk. Actually Alice is anxious for the walk but Ned is finding it hard to go far anymore and would prefer to just layabout in his bed. He says that getting old is hell. We couldn't agree more. While they were outside, I was inside with my own painting on the easel. I had chosen a Truchas scene, late in the afternoon when 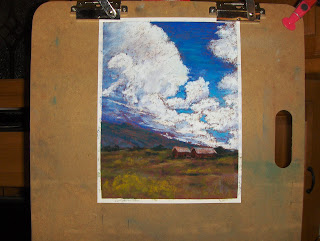 the clouds were gathering for their afternoon thunderstorm. After looking at so many excellent paintings in the galleries of Santa Fe, I decided to try a different technique of using more neutral tones. It is interesting to me that although I set out to do something different, the painting still is emerging in my former style anyway. 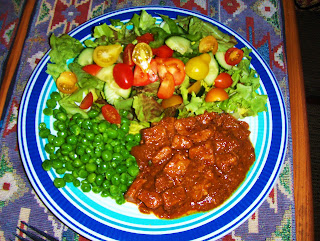 Around noon, we both set aside our paintings and concentrated on finishing up our Sunday Dinner. We had acquired some English Peas at the Farmers Market and we quickly shelled them and started them cooking. Then we took the fresh lettuces that we had also gotten at the same time as the peas, and made a beautiful salad. Sometimes...nothing beats home cooking. What a great day.
Posted by Art In The Sun at 6:30 AM