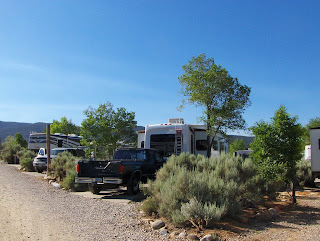 Here in Taos, we are staying at the Taos Valley RV Park. The park is completely full and it appears that some of the occupants are here for the rodeo next weekend as there are many horse trailers among the 5th wheels and motor homes. This event combined with the 4th of July on the following weekend must be the reason that I had such a hard time negotiating a time frame for our visit. There are also many river rafters who stay here while they raft the white water of the Rio Grande during the day. It is a popular park located a couple of miles south of the old town and the summer prices reflect its popularity. We are paying abo 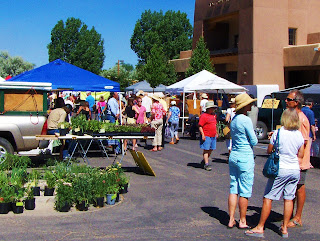 ut $35/night with discounts for FHU. The park is dotted with small trees, sagebrush, and chamisa...which gives a wonderful fragrance to the whole area and each site has a picnic table and barbeque.
Saturday morning we headed off to see the Taos Art Museum which is located in the historic home of Nicolai Fechin, a Russian artist who relocated to the US following the Bolshevik revolution. But as we were traveling through the Plaza district, we spotted the Farmers Market and stopped in to see if we could find some good produce. 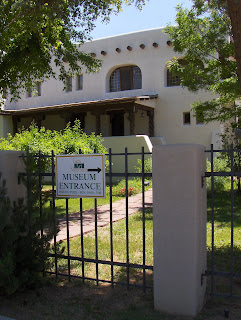 We managed to find some delicate leaf lettuces and some fresh english peas. Here the peas are just starting to produce and we had finished our own crop of peas grown in my brother's garden 2 months ago. The climate always has the last say in these matters. However, the climate had nothing to do with the delicious bran muffins we found, loaded with apricot and apple chunks....so we added a few of those to our bag of goodies, along with some homemade granola. 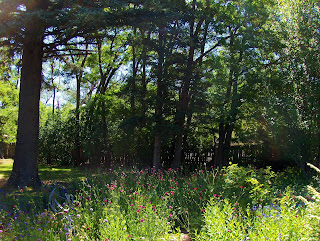 Then we weaved our way through the plaza over to the Fechin Home and Garden. Fechin had purchased a two story adobe home which he then began to remodel, adding extensions to the home and enlarging some of the interior spaces. He painted during the day an 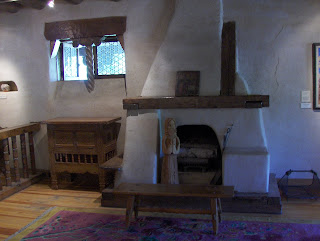 d then in the evening hours he worked on the house. He was a simple living man who enjoyed gardening, cooking, and his art. He had trees brought down from the forest to be planted around his property and many of them are still there with a beautiful garden situated around them. His own father was a woodcarver of Russian icons and he had learned this art when he was 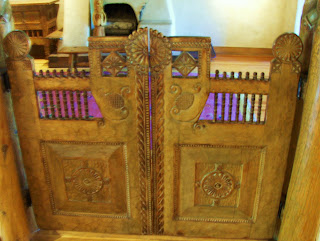 young, this skill combined with the architectual classes he had taken in art school gave him the ideas of reworking the adobe (see the fireplace above) into different forms and carving all of the doors, lintels, furniture, posts, niches, and cupboards from his own hand. The short swinging doors between the dining room and living room (photo above right) were carved freehand after making a rough drawing of the design he wanted. He used hand woodcarving tools and they are now a part of the National Cowboy Museum. There were no power tools used for any of the woodwork on the home. In the photo below rig 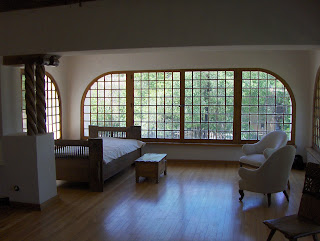 ht, he created a sunroom on the second floor with his own design for the windows. Every door in the home was hand carved including the doors of each cupboard and closet. His daughter was small in stature and he designed special furniture for her as can be seen in the two small chairs in the sunroom. He even designed all of the metal work for the home creating original lamp fixtures, latches, and hinges. He worked on the house for only six years when he was divorced and he moved to Santa Monica with his daughter. (An interesting aside....the Santa Monica home was purchased by Serge Bongart, another Russian artist after Fechin's death. Serge gave art lesson 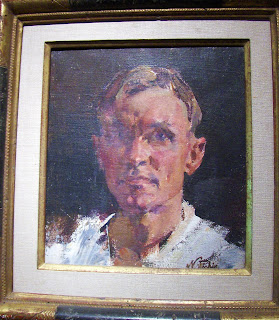 s and Urania Christy-Tarbet, the founder of the International Association of Pastel Societies took lessons from Serge.....Allan and I then attended one of her demos at the IAPS convention where she encouraged us to look at the Russian artists in the use of color. Isn't everyone connected by only 6 steps?) Fechin's daughter returned to the house after her mother passed away at the age of 90 and began to arrange for the home to become a showpiece of her father's work. It became a Historic Site and then later the Taos Museum of Art acquired it to display not only Fechin's art but all of the collection of the Taos Artists from the early 1900's. Fechin's self 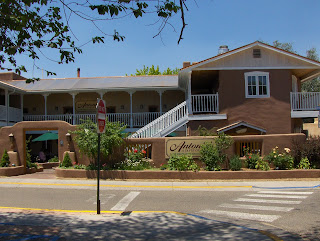 portrait is to the left.

After walking the garden and peering in at Fechin's studio, we walked back through the plaza to Antonios for lunch. Of course after lunch we had to tr 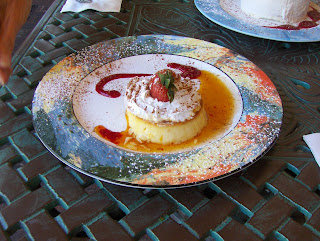 y the desserts and Allan had the flan while I had a tres leches cake. My cake was so huge that I could only eat half of it, so we brought the rest home in a doggie bag. Allan is giving this flan a first place for presentation but it only moved into second place for taste and texture.
Posted by Art In The Sun at 5:55 AM