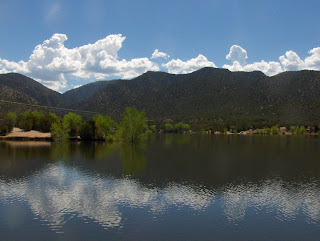 On Sunday we decided to drive part of the High Road to Taos. We headed north out of Santa Fe to Pojoaque where we turned east on 503. Not far along was a side road heading to Nambe Falls and Lake, so we turned on to this smaller road which turned out to be part of the Reservation and continued for about 5 miles to a gatehouse where we paid a day use fee and also a photography fee. The falls were actually quite a walk up a canyon but we were able to walk part of the way and see the river amongst all of the oaks. Later we drove up to see the lake which is really a reservoir. But it was surrounded with vegetation and we could have taken our kayaks (had we known) as there were canoes out on the water and it was very peaceful there. 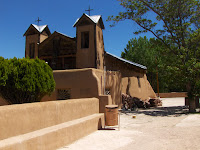 Then we headed back to the main road and continued on towards Chimayo. As we neared the town we stopped at the Chimayo Sanctuario which apparently has some sacred soil of which people are allowed to take a pinch to use for healing. When we arrived there was a service being conducted so we did not get to see the inside of the Sanctuary or get any of the soil, but the outside was very interesting with crosses planted or mounted everywhere. People had even made little crosses of sticks which they put in the 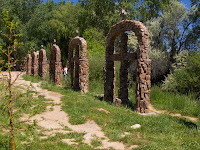 
By now it was getti 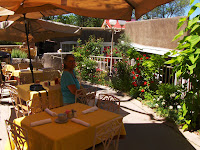 ng close to lunchtime and we had been given a recommendation for the Rancho de Chimayo Inn. We were very pleased with the stairstep patios and flower gardens along the verandas. And we were even more pleased by the food. Allan had Carne Adovada again and I had Carnitas. Both meals came with sopapillas and honey. Of course Allan had to try the flan which was homemade and I had a dessert new to me called Natillas (little clo 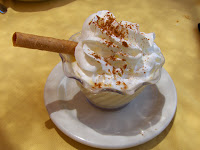 uds). There were many choices on the menu that sounded good, so we will have to go again. Lucky for us, it is on the high road to Taos, so we can come from that direction as well in a couple of weeks when we are staying in Taos.

After lunch we headed up to Truchas. T 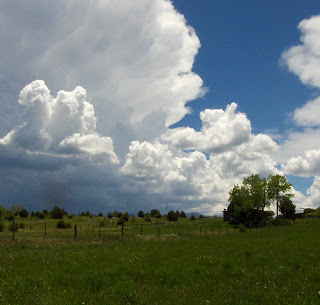 his was a makeshift town of buildings; some falling apart, some built with odds n'ends, some newer adobe homes, and some horse ranches. The terrain was on the ridge of mountains and there were grassy meadows and pastures with creeks running along the edge of the road. Many of the homes had signs out indicating they were artists of weaving, or sculpture, or found art. We passed an artist along the road painting plein aire in oils of a scene across the mountain valleys. There were wildflowers everywhere and the feeling was more alpine than high desert. We turned around and headed back to Santa Fe and we will finish traveling the high road when we are staying in Taos.
Posted by Art In The Sun at 7:13 AM