We headed out from Albuquerque on Monday, 6/1 and made it to Gallup, NM early in the afternoon. This view is from the front of our rv looking out into the desert while we were parked at the USA RV Park. http://www.usarvpark.com/ We always seem to use this park when we are traveling to and from Arizona/New Mexico. It is just 16 miles from the Arizona border and has nice pull throughs with reliable FHU's.
The following morning we headed off to the J&H RV Park in Flagstaff, AZ. Once again we arrived early, so we headed downtown for some lunch and grocery shopping. Also we stopped in where our crv was stored and payed them some more money to keep it until December. The J&H RV Park is really a well run park and has a wonderful off leash dog area and a dog wash station near the office. http://www.flagstaffrvparks.com/
On Wednesday we had a very long drive to Las Vegas caused by the fact that we did not take the rig over the dam, but went through Bullhead City and up the Nevada side of I-95. The grade up and then down to Bullhead City was hard on the truck and I doubt that we will go that way again. But we finally arrived at one of our favorite parks, the Oasis RV Resort with their pool and spa surrounded by palms. Really it is an Oasis in the desert for us. http://www.oasislasvegasrvresort.com/ We spent a couple of days washing clothes, rugs, and sheets. We also managed to visit Trader Joes to stock up on dog food for the boys as we will not be near another Trader Joes for months. We went to the strip one evening and had the buffet at the Bellagio and later thought that it was not as good as it had been in the past. Is this a function of old age or maybe it really was not very good. Anyway we took the cameras with us and got some interesting photos of people and buildings and interior spaces for later paintings.
On Saturday we headed off for Tonopah and only made it as far as Beatty when we discovered we had a flat tire on the rig. Oops. Lucky for us we had just arrived in Beatty, so we found an old run down tire shop where the owner put on our spare for $10.00. Allan gave him twice that we were so grateful he was there to help. He suggested we get some better tires on the rv as the ones we had were not up to the job. We have been intending to do that but we were trying to wait until we got to the NW. We stayed in Tonopah for the night at the Ramada Tonopah Station & RV Park. This is 30 amp E and water. Just a place to park and not much else.
But we were glad we stayed there as the weather turned nasty with high winds and rain in the afternoon and evening.

d out for Verdi, NV....just 2 miles from the CA border on I-80. All went well until we pulled into the rv park and looked at our tires. The spare was now going flat. Uh-oh. Not much to do on a Sunday so we unhooked again, pulled in our slides and went in search of air for the tire. Now we are back in Terribles Gold Ranch Casino & RV Park http://www.goldranchrvcasino.com/ and hooked back

up. This is a beautiful park, but a little more expensive. There are walking trails which we took 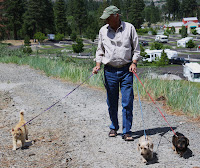 advantage of right away to work off some of the stress of the tire. Ginger was so thrilled to be out walking that she was leading the pack most of the time. Tomorrow we check our tire before we leave and hopefully it still has its air. And for those of you who are wondering about the Groovin' part of the title, it refers to the new ipod that we have hooked up to the truck speakers so we can listen to our music. Yep, singing to Joe Tex down the highway. Or a little Lyle Lovett. And yes, even a little Dolly Parton.
Posted by Art In The Sun at 3:42 PM