After our successful Mono Lake paddle with Mark and Renita, we decided to take the kayaks and can 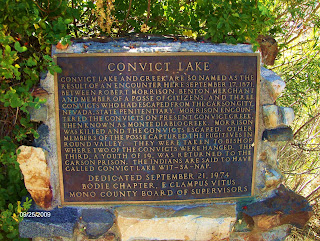 oe down Hwy 395 to Convict Lake a few days ago. Convict Lake is a small glacial lake with spectacular scenery and brilliant blue water. It got its name from an incident many years ago when some convicts were trying to escape up the creek and murdered Mr. Morrison who was a store owner at the lake and was one of the members of the posse. The creek is now called Convict Creek and the mountain to the south of the lake was named Mount Morrison.
The lake has a small resort and restaurant with cabins and there are camping spaces for those wi 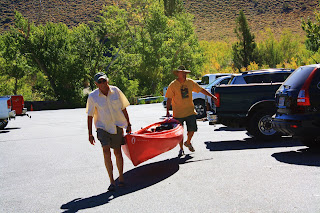 th smaller rv's or tents. There is a small marina where you can launch your own boat or rent a boat to fish in this no-wake lake. We parked our trucks and unloaded the canoe and kayaks in the boat launch area which h 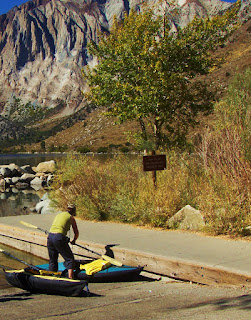 as been made into a tiny harbor because of the afternoon winds. While Allan and Mark were assembling the outrigger on the canoe, I was putting the paddles together for the kayaks. We loaded up our cameras and lunch and were set to shove o 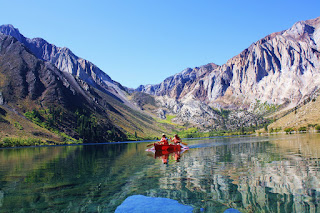 We all paddled out further in the lake to take a closer look at the mountains rising up as a backdrop all around the lake. Mark and Renita are in their canoe with Mount Morrison rising up on the left side of the photo, Laurel Mountain barely seen on the right side of the photo, and the Sevehah Cliff in the background with its many spires and indentations. The lake was so still when we first set out that the mountains were 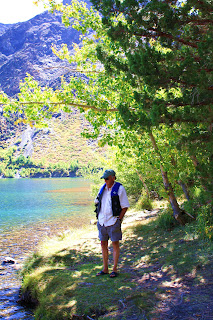 perfectly reflected in the water.

At the far end of the lake was a small sandy gravel beach and we all disembarked to stretch our legs and look around. Allan went off to check out Convict Creek hiding in the aspens that lined the wheelchair accessible trail that encircles the entire lake. Mark waded out into the water to check for caddis larvae and determine if the lake was healthy, and it was. While we were resting in the shade of the asp 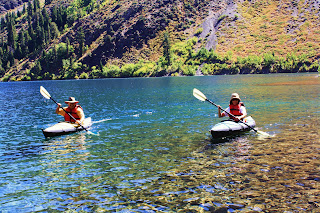 ens, I was able to convince Renita to try my Folbot kayak. Mark said he would give Allan's kayak a try also, so they took a short cruise along the far side of the lake. Judging from the smiles on their faces, it looks as if they like the Folbots. 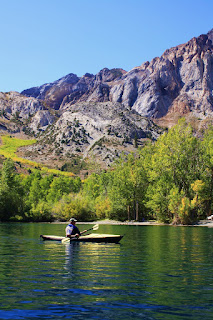 After Mark and Renita came back, we all got back in our respective boats and headed over to the shoreline under Mount Morrison to eat our lunch and then as the wind was starting to gust just a little, we headed back to the boat launch, paddling a little harder than when we first started out. Great weather, great lake, and great friends. Doesn't get any better than that.
Posted by Art In The Sun at 10:46 AM