4 Buffets in 4 Days In Las Vegas 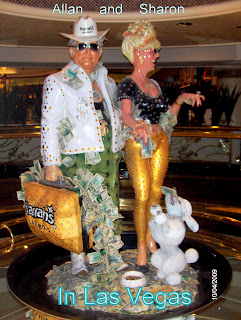 As the Eastern Sierras dropped in temperatures, we headed over to the Oasis RV Resort http://www.oasislasvegasrvresort.com/ in Las Vegas for 5 days before we head over to Phoenix to check in for the Winter at the Sunrise RV Resort. While we are here in Las Vegas, it seemed like a good time to take Alice and Ned to PETCO to get a shampoo and trim. They came out looking like brand new dogs and they smelled good too. Allan has been busy making some minor repairs to the truck, getting its oil changed, and running it through the car wash. And of course, it would not be Las Vegas without going to a Buffet. As I researched the possible choices, I noted that the lunch buffets were quite a bit cheaper and had most of the dinner menu items. So we headed out to the Mandalay Bay Buffet which is on the list of the 10 best buffets in Las Vegas. www.lasvegasdirect.com/topbuffet We were seated in the Garden Room where we could look down on the inner landscaping of the Mandalay Bay and it was a perfect luncheon setting. The salad bar selection was very good, although it was spread around on separate counters. I loaded up on the ice cold boiled sh 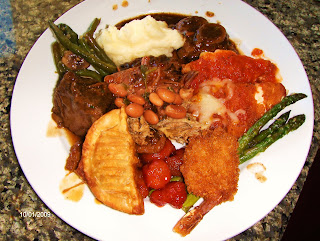 rimp and Allan went with a more traditional salad, including many of his favorite items, such as pickled beets and grilled peppers.
After our salad, we headed back for some of the main courses that were offered and we had a wide selection. There was a pasta station, an Asian station, a Latin station, Sushi station, and prime rib station. There was even a pizza bar. As you can see from the photo of my plate to the left, reading like a clock, I took a little Osso Buco with mashed potatoes at 12, lasagne with chicken cacciatore and asparagus at 2-3, Sweet & Sour Pork, Fried Shrimp, and a Potsticker at 5-7, Short Ribs with delicious sauce at 9, green beans at 11, and the absolute best Beef Barbacoa and pi 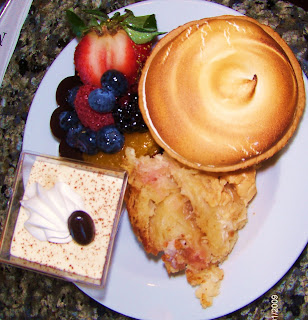 ntos in the center. We had to go back for a little more barbacoa, oh my.
Then we should not have even looked at a dessert bar, but in for an inch, in for a mile. Allan chose the fruit tart, lemon meringue pie, bread pudding, and the tiramisu. The tiramisu was excellent. Upon reflection, this buffet's excellence was in its entries, then the salad bar. The service was attentive as well. The downside would be the desserts. Other than the tiramisu, they were all pretty dry. We would go here again. And again, and again. 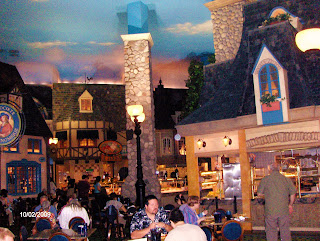 On Friday, we decided what the heck, let's try another buffet. This time I made the pick and we headed over to Le Village in Paris. The decor here had been touted as somewhat Disney like but we liked it. Each station was set up according to a district in France with the dessert bar in the middle. It looked like a small village under the blue sky.

The salad bar was minimal. Some lettuce and a few items to put on the lettuce. But in its stead was a grilled veggie bar where the veggies were being grilled and set out fresh. Shitake mushrooms, zucchini, tomatoes, and peppers were some that come to mind. Here you could help yourself to thin flatbreads, grilled veggies, and some fantastic sauces such as aioli, romescu, pesto, hummus and others. There was also boiled shrimp and other seafood to use as a starter instead of salad. Where they really fell down on their faces were the soups. I have been in the real Paris, where the potage is excellent in every small bistro. But here it was inedible. Thin watery off taste French onion soup and gloppy starch tasting clam chowder. Not good. Where they excelled was in the vegetables that they offered along with t 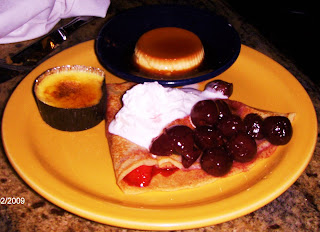 heir entries. A creamed lightly curried cauliflower dish, braised herbed carrots, scalloped potatoes, leek mashed potatoes, tiny half yams big enough for two bites. And they offered Osso Buco, short ribs, sliced pork loin with spiced apple sauce or navy beans, and especially the quiche was good. The best station of all was the crepe station. Allan went back twice. The crepes could be made with ham and spinach, but of course we went for the cherries with raspberry sauce or fruit compote which was 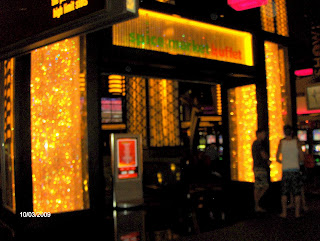 exceptional and had tart damson plums in it. And Allan had the flan as well as the creme brule. We would sin here again.

Well since we were on a roll, on Saturday at noon we headed over to another of the top 10 buffets, this one in Planet Hollywood and on the list for its gustatory offerings from around the world. The Spice Market Buffet had a very Las Vegas Entrance and we went through the doorway and down the long escalators to the cashiers before being shown to our tabl 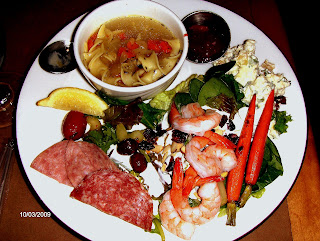 e and ordering our traditional ice tea. Our first course of soup was again a disappointment. Only slightly better than at the Le Village Paris Buffet, but still lacking in taste. The salad bar was a little better with the ubiquitous boiled shrimp offering (notice how jaded we are becoming) and a few grilled carrots and garlic cloves that were not given the proper amount of time on the grill and were still raw. However, there was an Italian Antipasto area with some very nice meats and cheeses. As we moved on to the entries, we became a little more excited as t 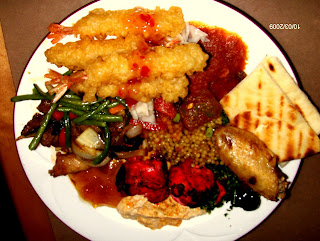 his buffet had a few items that we had not seen before. There were the various stations from different countries; Asian, Mexican, Italian, etc., but we made a beeline straight to the Middle Eastern station. Here we loaded up on Tandoori Chicken, Vegetable Curry, Naan, Mango Chutney, Tabouli, Couscous, Hummus, Baked Tomatoes with Lamb Stuffing, Samosas, and Persian Figs. Everything at this station was good and Allan went back for seconds. There was barely enough room on the plate for some of the other offerings from the other stations but Allan managed to find a little room for the Carved Virginia Ham and I helped myself to Tempura Shrimp. The dessert station turned ou 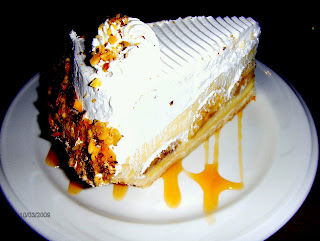 t to have some of the freshest desserts we had encountered so far. Allan had his usual Flan, which he said was as good as the Flan at the Paris Buffet, and also he had the Bread Pudding which was exactly how he likes it, nice and custardy. I noticed a dessert that I used to love and hadn't seen in a long time, Banana Creme Pie. Well, I had to give it a try and it was delicious. The bananas were fresh, the pudding part of the pie was creamy and the whipped topping was not too sweet. Perfect.
Sunday was our last day in Las Vegas and we headed back downtown for one last buffet, this time Cravings at 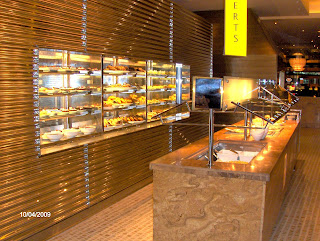 the Mirage. This buffet concentrated on Asian specialties with Chinese Curry Beef, Fresh WonTon Soup, Potstickers, and Dim Sum. The Japanese entries had Sushi of course, plus cucumber rice wine vinegar salad. The salad bar did not have too many selections and a station attendant tossed your selections for you. The carving station was very good with a very tender prime rib. There were many selections of seafood, but because it was Sunday, we did not see the Brazilian Station as it was supplanted with breakfast items. The dessert bar seen to the left did not have the number of options that we had seen over the past few days, but Allan managed to find a Lemon Pie to try. Most everyone, including us, went to the Crepe Bar for dessert but the crepes did not even come close to those made in Le Village at Paris. So after 4 days of gluttony, we have come to the conclusion that our first day was the best overall. We would definitely go back to the Mandelay Bay Buffet again. Le Village at Paris came in a close second and we would return there as well. The last two days were just OK and I doubt that we would go back for a second try. Now, Back To The Diet.
Posted by Art In The Sun at 10:43 AM