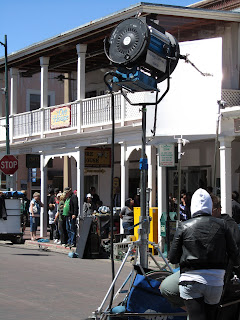 Today we had sunshine for the first time in several days and it seemed like a perfect time to head to the Plaza and get some fresh air. After we parked the truck, we walked along the storefronts towards the plaza but we were detoured around numerous trucks full of equipment and arc lights. As we approached the plaza we had to stay away from the west side as they were filming a movie with William Defoe and Tim Robbins. They were inside one of the plaza cafes and although we waited around for a bit, they did not emerge out into the street where there were numbers of camera crew standing around and extras placed strategically on the park benches. If we had only arrived a little earlier we could have been extras, oh well, that is always the way....when our ship comes in, we 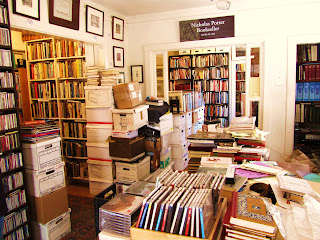 are always at the airport.

So instead we headed past the plaza down Palace Ave to visit the Nicholas Potter Bookstore where we both found some interesting used books. One of the books that I purchased was by Wolf Kahn and it was about the paintings he had done as he had toured across America. Another treasure I found was a book with the original text by Daniel Defoe as he toured Great Britain prior to the Industrial Revolution. You 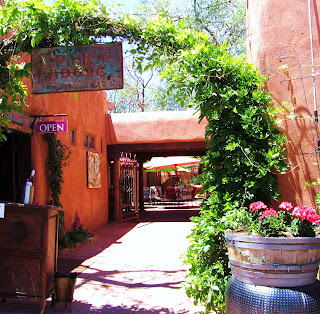 might remember him as the author who wrote Robinson Crusoe. Allan picked up a real fast read entitled "The Rising Sun in the Pacific 1931-1942, A History of United States Naval Operations In World War II". Prowling around a used book store always gives us an appetite, so we headed up to the Pink Adobe Cafe for lunch. Allan 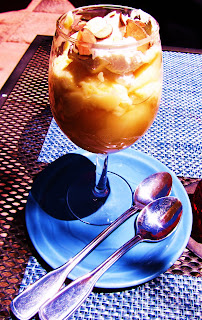 had a burger and I had the Green Chile Chicken Soup and both were delicious, but couldn't be outdone by the Pear Custard Amaretto which we shared for dessert. On the way back to the truck we stumbled onto another bookshop where I found yet another fascinating book called "Journalistas" 100 Years of the Best Writing and Reporting by Women Journalists. What a wonderful day.... good food, sunshine, and great books to read. Now if we had only gotten into the movies, our day would have been complete.
Posted by Art In The Sun at 4:35 PM