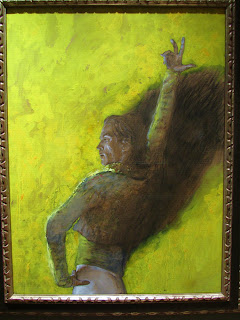 ted two art museums; one is the New Britain Museum of American Art and the other was the Wadsworth Atheneum Museum of Art in Hartford. Both of these museums had excellent, wide-ranging examples of American and French Impressionists but there were some other art works that we came upon which were fun to see in their own way. First of all, there was an entire room of Jamie Wyeth paintings of ..... da da ta da.... Rudolf Nureyev. It turn 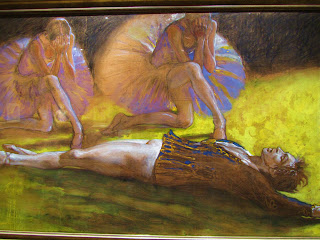 s out that Jamie begged Nureyev for three years to let him paint him at the theatre, rehearsing and performing. Finally Nureyev conceded and Jamie worked on sketches and paintings for over a year including studio paintings where Nureyev came to Maine to visit. They remained friends for over twenty years aft 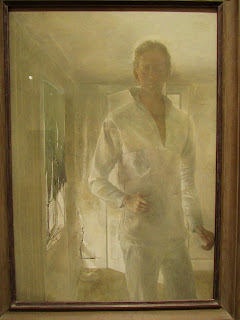 er that until Nureyev died. The portrait upper left was later made into a poster for the ballet "Don Quixote". There were several studies in charcoal and paint of the dancer including one of him in the nudie, sorry ladies (or should I say gentlemen) there is no photo of that sketch since I did not want to contribute to internet porn i.e. Rep. Weiner. In the same museum we also saw some unusual paintings by both of the older Wyeths. Andrew (Jamie's father) had a self portrait, he only painted two of these in his lifetime as he usually painted landscapes or barns, most fa 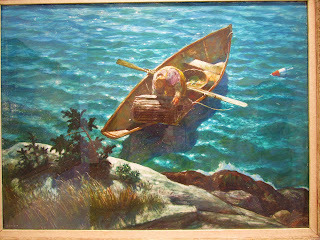 mously the painting of Christina's House. The paintings by N.C. Wyeth (Jamie's grandfather) were also unusual as he was mostly an illustrator and rarely did paintings for his own enjoyment. The painting entitled "Sun Glint" was considered the best painting he had ever done that was not an illustration. 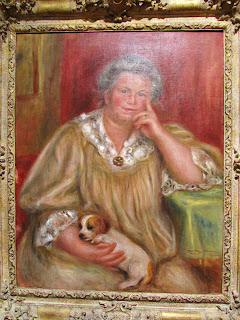 . . . . . When we were in DC, I blogged about a Renoir painting that we saw at the Phillips Museum. I mentioned the young lady on the extreme left of the painting who later became his wife. Today we were able to fast forward a number of years to a portrait of Aline as Mme. Renoir where she looks much more matronly than she did for the portrait of the Luncheon. She had been a model for him in a number of the intervening years prior to becoming married and I noticed that in this painting she also has a little dog just as she did when she was younger. . . . . . . And just a little farther back in my blogging history. . . last year Allan and I visited D.H. Lawrence's gravesite in New 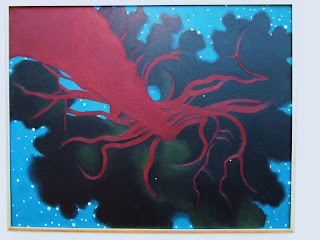 Mexico where we saw a very faded beatup photo of a painting by Georgia O'Keefe of a mighty tree in the patio of his little cabin. She lay on her back and painted the tree at night with the stars all around. She said that she painted "Lawrence's Tree" so that it could be hung in any direction but today we saw that painting and it was hung on its head which was the direction that she had preferred above all the others.
Posted by Art In The Sun at 5:27 PM