Heading into Missouri, Allan realized that the truck brakes were not functioni 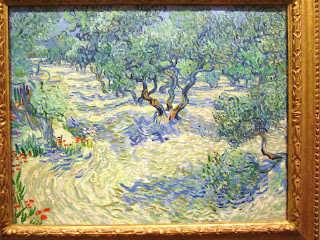 ng as well as they should be, so when we got to Kansas City we checked into a KOA for three nights so that he could take the truck to a brake shop. While we were here we decided to go to the Nelson-Atkins Museum of Art which turned out to be a lovely museum with free admission. We headed straight for our favorite sections of European and American Paintings. One of the first paintings we found was Van Gogh's "Olive Orchard" which he painted in the last year of his life while he was living at the asylum where he had committed himself with what was thought to be mental illness, at the time. Now there has been renewed investigation into his symptoms and it is possible he had Meniere's Disease, which 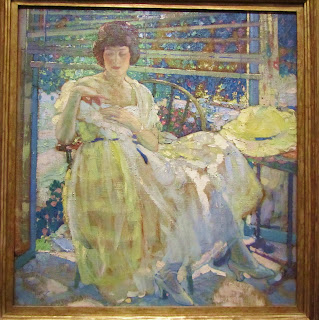 is an inner ear disorder which causes everything to spin around you, a feeling of vertigo accompanied by a roaring in the ears with feelings of panic and depression. The swirling effects that are seen in his skies, trees, and shrubbery could be what he is actually seeing during an episode of this disease. . . . . There was an American artist from St. Louis, MO who spent 15 years in Paris and then an additional year in Giverny with Monet in 1907. Richard Edward 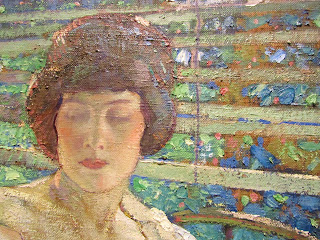 Miller had two paintings in the museum, both of women and both in an impressionist palette but with a couple of differences. In "The Sun Porch" you can see the bright palette and the dabs of color or loose brush strokes except in the figures face and hands which are carefully modelled and are reminiscent of Gustav Klimt. Neither of us had ever heard 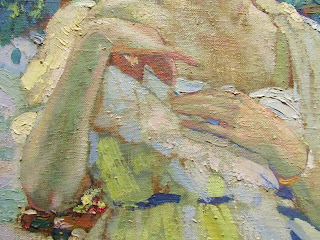 of this artist before but we really liked his paintings. The light coming in the window and falling across her clothes was lovely and it was done with blotches of paint placed carefully. The blotches were so thick that they looked as if you could peel them off the canvas, but the hands are painted delicately, more like what you would see in a Sargent po 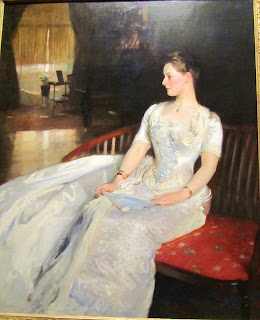 rtrait. . . . . There was a John Singer Sargent portrait there of "Mrs. Cecil Wade" who was one of his first commissions in London after he was shunned in Paris for painting Madame X. In the Mrs. Cecil Wade painting he is at his best in his brush strok 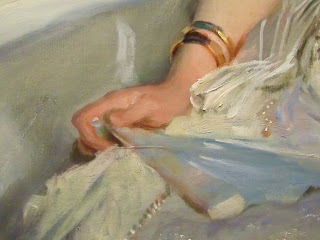 es which are unparalleled in evoking satin, pearls, lighting, wood, metal, textures of any kind. A close up of her right hand wil 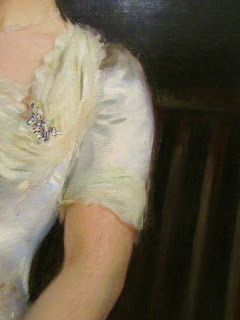 l show how delicate he is with his brush strokes, they are so fine, they are barely seen. We were especially interested in how Sargent painted edges. We have been learning about lost edges and found edges in past workshops. Here we got to see more of a penumbra effect along many of his edges. In the close up to the left, there is a ghost image of her sleeve against the dark background. And the background intrudes softly onto the upper portion of the sleeve as well. Everything Sargent does in this painting is subtle but it all adds up to a painting we just stood and looked at for almost half an hour. But Sargent was not always so precise. And he probably took ext 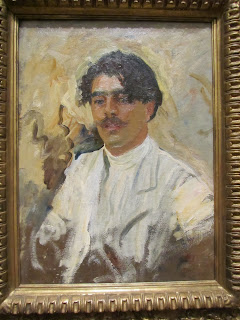 ra care with his commissions, but on a trip to Majorca he painted a portrait of an Argentinean artist and you can see all of the impressionistic brushstrokes and lighter palette emerge. . . . . There were many more of our favorite artists and we had a wonderful afternoon visiting with them all. But we were getting hungry and we decided to go out for Kansas City Barbeque. We found the SmokeStack right down the street from the just 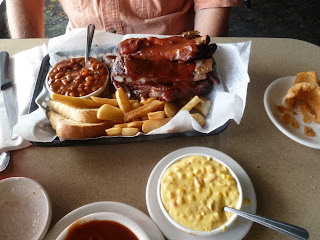 opened Trader Joe's. Allan had the rib basket and ordered the corn cassarole as a side. A corn cassarole is canned corn, canned cheese, cream cheese, bacon bits, and garlic. It was not something that I cared for, but Allan ate the whole thing. I must be a barbeque wimp because I like Famous Dave's and haven't had anything that would replace it so far. Today our brakes were fixed by replacing the vacuum pump so we will be on our way west again tomorrow morning.